New Yorkers Might Finally Be Able to Swim in Their Rivers 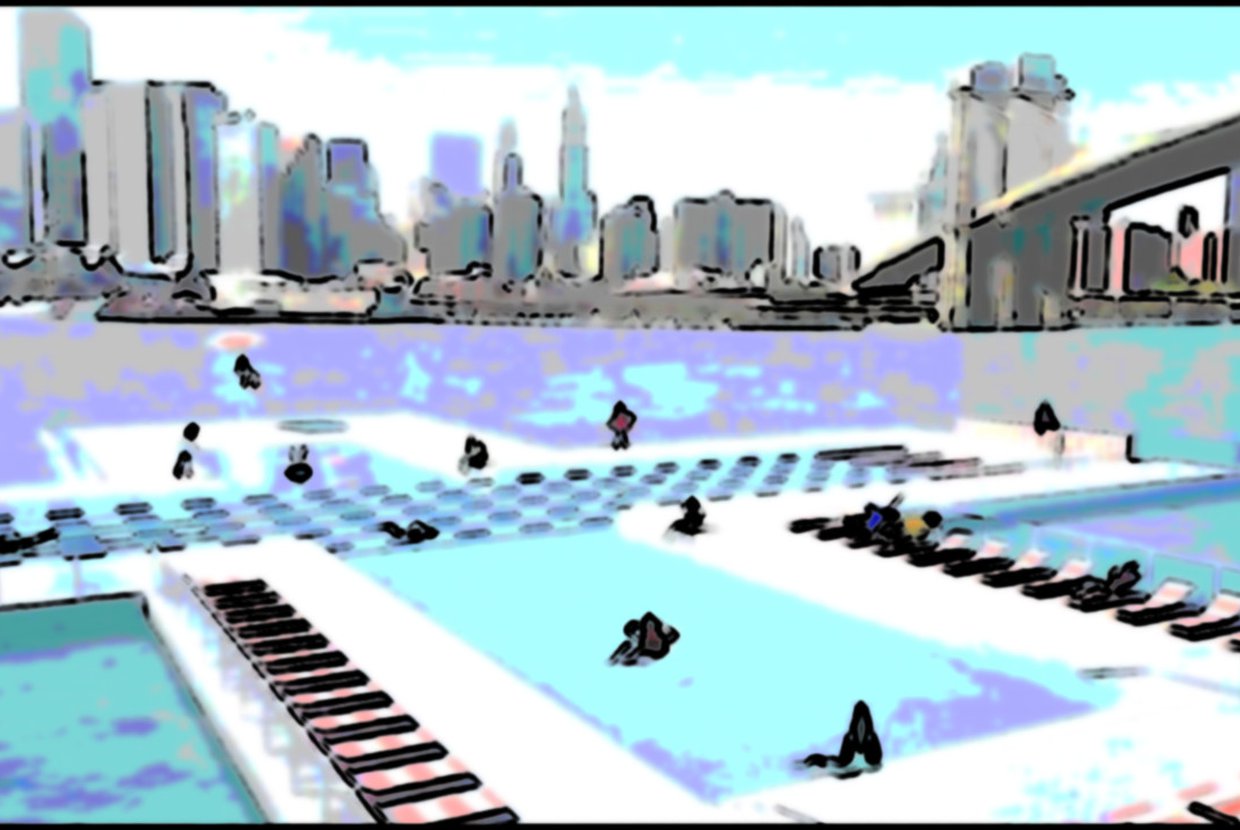 Sometimes a person's dreams can, in fact, become a reality. Case in point: a floating swimming pool atop the East River that will allow New Yorkers to swim in the river without growing a mutant arm or leg. This proposed community pool, known as + POOL, is the multipurpose, plus sign-shaped brainchild of three friends; Dong-Ping Wong, an architect at Family Architects, and Archie Lee Coates IV and Jeffrey Franklin, engineers at PlayLab. Together, the young creators are working to revolutionize New York's waterfront scene and construct a 9,000 square foot pool designed with everyone in mind.

As for how this innovative idea came to be, the story behind it all is rather simple. About two years ago, on one of New York's many oppressively hot summer days, the trio decided enough was enough. Fed up with being engulfed in sweat with no proper (or affordable) nearby retreat, they proposed the notion of transforming the city's filthy rivers into swimmable oases. Then, once they realized that their "crazy" idea was potentially feasible, they turned to Kickstarter,  a crowdfunding website that attracts everyone from artists to celebrities, to galvanize New Yorkers and raise funds for the cause. On their page, they laid out their design plan. Knowing that trying to tackle filtering and purifying all of the East River would be an extremely arduous and likely unrealistic task, Archie, Dong, Jeffrey, and their team narrowed down their focus to only include a small portion of the water. From there, they mapped out a multi-part pool comprised of four different connected but independent smaller pools: a children's pool, a sports pool, and lap pool, and a lounge pool. Then it was time to urge the public to provide some much-needed financial backing to fund the necessary tests to demonstrate that their invention could work.

Unsurprisingly, the public's response to + POOL's Kickstarter campaign was overwhelmingly positive, and many were equally as excited as the founders of the pool to see the entire concept come to fruition, especially one that involved a filtration process that would act "…Like a giant Brita filter…[capable of] clean[ing] half a million gallons of water every single day…" In fact, in just six days, the project managed to raised $41,000 from 1,203 different backers, a whopping sum when compared to their initial request for just $25,000. Once their goal was achieved, or rather, once it exceeded its original expectations, the three friends and a team of researchers from Columbia University were finally able to head out to the water. During this time span, not only did they successfully test 19 different parameters over a 10 week period, but they also discovered that the filtration system was even capable of purifying the water after large storms. In other words, the coast was (quite literally) clear for them to continue on their path towards creating + POOL.

Relying on what they knew and loved, the + POOL team returned to Kickstarter to promote their cause this past Wednesday June 12. On their new page, they have taken the concept of a community project to an entirely new level, offering backers the opportunity to own their very own part(s) of + POOL, simply by purchasing one of the 70,000 tiles that will go towards constructing the future pool's deck, walls, and floor. Not to mention, supporters of the cause will not be the only ones benefitting from their purchases. Ultimately, if every one of these tiles, which vary according to their colors and perks (i.e. a full week of private access to the pool before it opens to the public, also known as "First Dips"), is paid for by Kickstarter fans, the entire $15 million construction budget will be covered, and the + POOL team will be able to breathe a little easier.

Of course, unprecedented, not to mention, expensive inventions like + POOL do not come without their naysayers, and the + POOL team has definitely received a barrage of concerns pertaining to the design, engineering, funding, and other issues behind their plan. Nevertheless, the media as a whole has been responding brilliantly to the pool, with everyone from Curbed to Gizmodo practically begging for this to become a reality. If/when the +POOL does finally begin its construction (which would be set to be completed by summer 2016), it will mark the founding of one of the world's largest publicly funded projects ever. Not only that, but it will also open up new opportunities to expand further into New York City's murky waters. Maybe it will even lead to the establishment of a whole network of river water pools. Although it may be too soon to tell, one fact nonetheless remains certain: in true New York fashion, the + POOL opening day lines will be outrageous, but, if all goes according to plan, they could very well be worth the wait.

To see how you can contribute to the + POOL campaign, follow them on Twitter or check out their Kickstarter page for more information.

UPDATE: They have officially reached their goal on their Kickstarter campaign, but as of today, there are still tiles available for purchase!