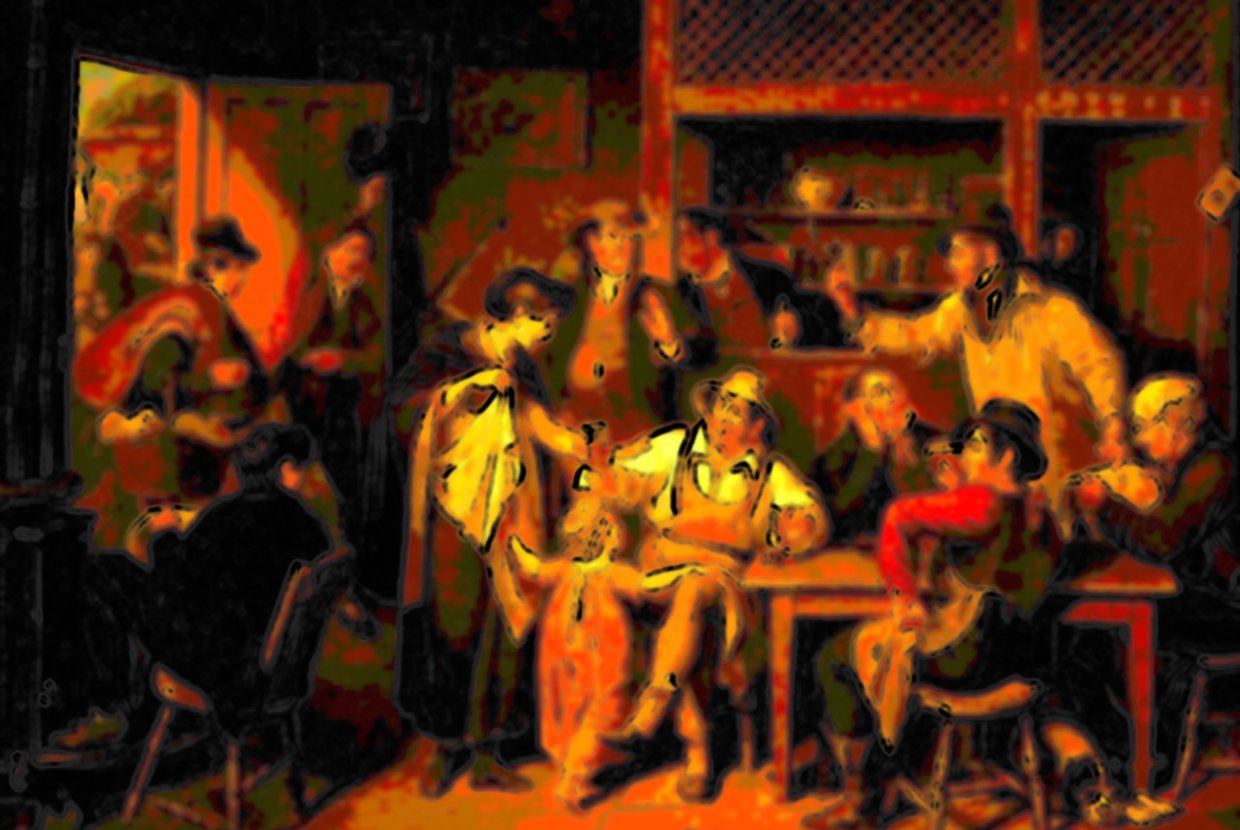 Its summertime and the weather is fine, so put on party shoes and hop into these bars that have a story to tell and come from era when you weren’t even born! These are our picks for the best bars where its worth getting high on history.

Serving it up since 1892, which is well over a hundred years, Old Town Bar on 18th Street, at the Flatiron District, is where you can gulp your beer and soak in the ambiance of an era gone by. Its 55 feet long mahogany and marble bar top, 16 feet high tin ceilings, a 258 square feet of bevel edged plate mirror, its giant urinals - which are icons in itselves, made by Hinsdale in 1910, the upstairs area which was formerly a “Ladies and Gentlemen” dining room, and their epic dumbwaiters which has now become New York’s oldest active restaurant conveyors - are just some of the things that draw the new breed of bar hoppers, and make the old-timers feel at home. Grab your grub, from a menu that features their specialty “Mayor’s Choice” hamburger(featured in NY Times, Gourmet Mag, Best of NYC), and their hot seller “Frankfurters” (featured on The Martha Stewart Show) and enjoy your evening.

Talking of historic bars in Gotham City, we had to mention the bar where George Washington partied when the British left - yeah (!), this is Fraunces Tavern Bar for you. Opened in 1760, as the Queen’s Head Tavern, in the Financial District, it is one of the oldest taverns in all of United States. Here is another piece of trivia for you - It was one of the meeting places for the Sons of Liberty in New York before the American Revolution, and so was a place for planning the uprising and plotting against Britain. Oozing with history, this bar is housed in a building that today is a national treasure marked by the National Register  of Historic Places. It houses a museum on the top floor, a Porterhouse, a bar and a restaurant. The bar serves up 18 craft beers on the tap, and if beer isn’t your thing, then Bushmills is your go to drink.

Housed in a building that was erected in 1794, The Bridge Cafe located on 279, Water Street in the Financial District. With a trail of grocery and wine stores, to a saloon and at some point even a brothel, it was finally bought by the current owners in 1979 and they named it Bridge Cafe. Although they upgraded the restaurant, the 1920’s interiors were restored to its full glory. Ed Koch frequented the place and he called it “his favourite restaurant”. The place has been part of the poetic prowess of several loyal guests, the movie Gangs of New York, where several of its rowdy scenes were set in the cafe, as well as some spooky paranormal activity of moving shadows, the sound of footsteps, and the smell of lavender - well, isn’t that enough perks for you to there and check out yourself? The cafe apart from being “one of the oldest drinking establishments in NYC”, is known for their soft shell crab BLT. Step in, soak it in, and share your experience, when Bridge Cafe opens this Fall.(They are currently closed for repairs from superstorm Sandy)

Perfectly located in the neighborhood of Hell's Kitchen in Midtown Manhattan, the historic Landmark Tavern, has been one of the oldest continually operated establishments in the city ever since. Opened in 1898 by Patrick Henry Carely, he opened the tavern as a Waterfront Saloon. Back in the day, 12th Avenue did not exist, so the tavern sat right along the shores of the Hudson, which Mr. and Mrs. Carley designed as the tavern on the ground floor and their family home on the upper level. After the prohibition they had no choice but to convert the third floor into a speakeasy. To date, the tavern has retained its old-world New York charm and that is what keeps guests old and new coming back here. Fish and Chips, their Monday night open Irish session, and a wide variety of beers tops their list.

Located on Spring Street, in the heart of SoHo, Ear Inn is yet another designated Landmark of the City of New York. Situated in the historic James Brown House, which was built in the 18th Century, and is one of the few Federal houses left in the city. Much of the building stands as it did back then, the doors and windows of the Inn date back to the 19th century,and a few 18th century style features; and it was even given a mention in the book Classic New York, by the then noted architectural critic Ada Louise Huxtable. A spot most frequented by sailors, the bar did not have a name for a long time, where Thomas Crooke brewed beer and sold crocks of corn and whiskey to tired and thirsty sailors. It was named Ear Inn by the new owners back in 1977, and named after the musical Ear magazine published upstairs to the bar. Their divine garlic and wine mussels, washed down with an icy pint of Yuengling, sets the tone for a laidback evening.

This high-ceiling bar with a carved wood bar top brought all the way from Germany in the 1870’s, gives the Brooklyn Inn a touch of bleak allure. With its eclectic jukebox, a pool table - that is most often the point of chatter than play, becomes the hot spot once the bar is packed with crowds jostling around for an elbow on the bar. This bar dating back to the 19th century,has twelve taps with brews like Six Point Brown Ale and Speckled Hen on offer.

The birthplace of the modern Gay Rights movement, the Stonewall Inn in Chelsea as where the Gay Pride began. It was from here that the Gay people refused to accept their status quo of being oppressed and stood up for the entire community. Often known as the Rosa Parks movement, the Stonewall rebellion, carved the way for the community to not accept second-class citizen treatment and expect that the LGBT community is treated as an equal in the eyes of the public as well as the law. June 28, 1969 marked an important day when the Stonewall Inn was raided, but this time it did not go as planned, and this was the scuffle that became the turning point in the fight for equal rights. To this day, pride parades are held to look back on the long road thousands of people dared to take - and with the recent victories in equal rights for the LGBT community, the Stonewall Inn is sure celebrating every single day, like it has been ever since that fateful day in June of 1969. With cheap drinks and great company, this is a bar where the feeling of emerging victorious is palpable every single day.

The proof is on the walls here at McSorley’s in the East Village. The Old Ale House that been around since 1854, has its memories from an era gone by, and floors scattered with sawdust for those tipsy-beer-spills. Crack up a conversation with your waiter and he’ll be sure to spill the beans about stories untold. Indications that the bar was once a “Men Only” might raise eyebrows for todays young breed, but its unpretentious and relaxed atmosphere, makes everyone feel welcome. This is your typical local neighborhood pub, where the regulars meet up and drink-up the regular as well. Gulp your dark/light ale, brewed in house for as little as $5.50, and couple it with snacks - McSorley’s Old Ale House, works as a day drinking spot or a spot to slip away under the moonlit night.

An establishment that began as a grocery store and was then converted to a bar in 1864, Julius Bar in the Greenwich Village, was built at the corner of Amos Street (West 10th Street) and Factory Street (Waverly Place). A popular speakeasy spot during the Prohibition, Julius Bar along with Nick’s at the corner of Seventh Avenue South and the Village Vanguard, were spots frequented by several  jazz and literary legends at the time. Back in the 1950s it began attracting the gay community, and today it stands as the oldest gay bar in the city and to add to its distinction it is the oldest bar in the East Village. Its claim to fame, was when films Both Boys In the Band and Next Stop Greenwich Village, were shot here. This was another bar where the gay community staged a protest against the NYS Liquor Authority’s regulation against bars serving alcohol to homosexuals. April 26th 1966, is when the “Sip in” movement took place here at the bar. Hamburgers and happy hours, Sunday all day beer at half price and weekend lunch and dinner specials are its specialties. Come on in and join in the fun!

That's a wrap on the nine nightcaps for all you New Yorkers to stop by. With the big holiday weekend coming up, what better way to revel the nations historic day, isn't it?