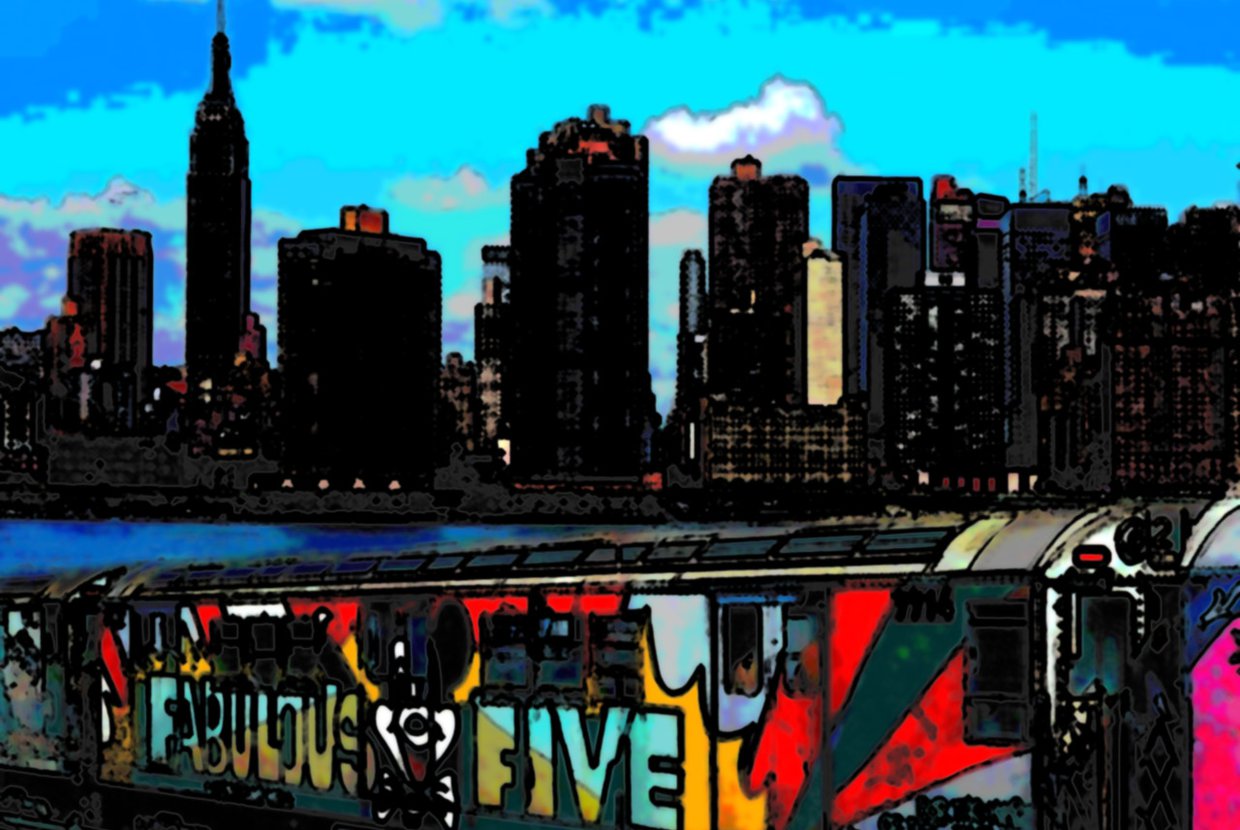 Today Gotham City is the land of soaring skyscrapers, but it wasn’t always known for its sleek and slender skyline. Time travel zooms in on the 1960’s, when the city was still in its infancy, its people slowly emerging from their cocoons, and trying to get their voice heard, and make the city home.

Emerging artists at the time needed an outlet to express themselves. Hence, the city became their canvas. Walls, bodegas, subway stations, trains - the city was suddenly enveloped in the imagination, and power of expression of the graffiti artists at the time.

Teenager Taki 183, was one of the first ones who began “tagging” his signature everywhere around North Manhattan. “Taki” taken from Demetraki, a Greek alternative to his birth-name Demetrius, and 183 taken off of his address on 183rd Street in Washington Heights.

It was the summer of 1971, that The New York Times, put out a feature article about Taki 183, called "Taki 183" Spawns Pen Pals” -  that turned around the graffiti scene in the city. The youth around the city “tagged” along following in the footsteps of Taki 183, who remains one of the most influential graffiti artists the city has ever seen.

Since then, there was no looking back. Graffiti artists popped up all around the city, and the trend shifted from “tags” to “bombing” - where artists would illegally claim walls across the city, specially the Lower East Side, and overnight scramble in the dark, fighting the rats and roaches and be done by daylight.

Progressing from walls to train cars, it was “moving art installations”, that became the center of the graffiti scene. Although New Yorkers cringed, shrugged, and raised an eyebrow, they began to live with it, at some point love it, and began to embrace it as part of the city’s identity.

Considering the New York Subway System has always been the “lifeline” of the city, it proved to be one of the best places for artists to take the spotlight. At the very beginning of this “masterpiece” (also known as “A Piece”) trend, the painting on the IRT Subway Train by Super Kool 223, is believed to be the first one, in a string of many many more that followed suit.

While “masterpiece” as a trend took off, writers such a PHASE 2, RIFF 170, TRACY 168, PEL MAD 1, FLINT 707, and PISTOL were some of the first ones to create the innovative lettering that later went on to become a quintessential part of graffiti. “Lettering” caught on quickly across the boroughs of Manhattan, Brooklyn, and Queens; as more young talent looked up to the ones who had already made a name in the graffiti game. The “lettering” soon became unique to each borough as it evolved, varied from “Blockbusters, Wild Style Burners, Whole-Cars, and “Top-to-Bottoms”.

By now the city was tattooed in the bright and bold colors of graffiti, so much so making it impossible for straphangers to see outside the window. Artists had begun profiling themselves across the five boroughs, and once they became popular enough, they came to be known as “kings” by going “all city”. Large-scale designs was now a new card on the art-block. This was pioneered by Super Kool 223 and mastered by the notorious, “The Fabulous Five”.

Just when artists had befriended the New York City Subway, so did the MTA introduce the “Clean Train Movement of 1989”, but the slowdown and the graffiti war had begun way back in 1972, before it culminated in this movement. All trains with graffiti were decommissioned, which only added to commuter woes. Artists and art lovers across the five boroughs were simply frustrated with the MTA service as well as their movement in shunning artists.

In a bid to make up for their anti-graffiti movement, they introduced the “Public Art Promotion”, an attempt to encourage artists to get back on the scene. While graffiti in the subways never really took off, they sure rose to the occasion, and graffiti reached the rooftops and further walls that were commissioned for artists, where they began a silent revolt.

One such commissioned wall space - Bowery/Houston Street Graffiti Mural Wall, a stunner building covered in colors of graffiti - 5 Pointz, and the Graffiti Wall of Fame in Harlem; are places today’s new breed of New Yorkers can visit, to soak in a slice of that golden graffiti era.

The Bowery/Houston Street Graffiti Mural Wall, was just like any other concrete slab, before it was taken over by curator Jeffrey Deitch, and owner Tony Goldman, who brought life to this slab that had been illegally used as a graffiti canvas, and commercial ad-space. Since 2008, they have collaborated with several celebrated graffiti artists to bring character to the wall and art to the community. Over the years, artists like Os Gemeos and the infamous Shepard Fairey have slapped on color and brought the wall to life, and so have Barry McGree and Josh Lazcano, among several others.

The 5 Pointz building - a cultural canvas located in Long Island City, is a structure whose walls were dedicated to the vibrant expressions of graffiti artists, by owner Jerry Wolkoff, since 1982. This space welcomed graffiti artists at a time when graffiti was being pulled off streets, and stripped off train cars. Under the alias “Phun Phactory”, 5 Pointz was (and is) a visual display bringing together the cultural elements of hip-hop, emceeing, break dancing, and DJing. A ride on the 7 train, welcomes you out of the tunnel, with a view of the vibrant yellow 5 Pointz building with a layer of graffiti enveloping the entire building. Of late, the building has been sold to a wealthy developer, who of course wants to tear it down and build condo’s. After a much heated debate, protests, and petitions, the mecca of graffiti 5 Pointz has been saved. The new plan involves building raising the art-covered warehouse and construct residential towers, with affordable housing for the city’s seniors and veterans, as well as a few artist studios and a free community space.

The Graffiti Wall of Fame in Harlem, is part of their everyday school life at “Central Park Secondary School”, since the graffiti wall is located in their playground. Located on East 106th and Park Avenue, the wall has played a pivotal role in the street-art-movement which began in the early 1980’s. Known as one of the spots for the infamous hip-hop monuments, community activist Ray Rodriguez, sought out to create a space for graffiti artists to express themselves, in a city that has little space left for this graphic art form.

Graffiti played such an important role in the art and culture scene back in the 70’s and 80’s, that it translated into the films at the time as well. Films like “The Warrior”, were based in the heart of the thriving graffiti and gang wars scene, and the whole nine-yards.

So, the next time you are in New York City, take time off from doing the touristy stuff and get down to experiencing the very essence of this metropolis - Art and Culture.

“Art is the only foundation where absolute freedom exists”