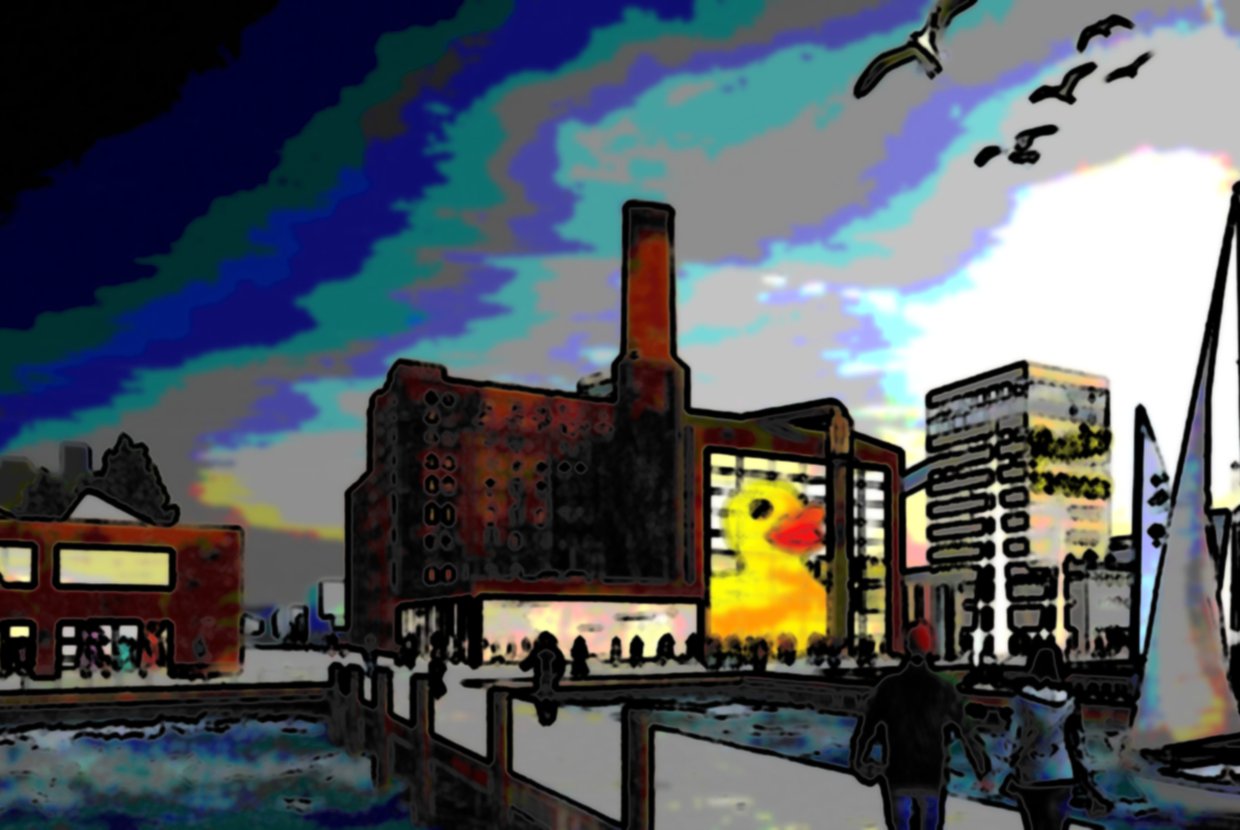 In an unexpected and slightly bemusing twist, a new rendering for the Domino Sugar Factory site has been made public. The alternative rendering, released by the Holm Arcitecture Office (HAO) with support from community activists, is a far-cry from SHoP’s renderings in that it repurposes the entire site into a center for the arts and public space rather than new residential and office space.

The renderings, viewable on HAO’s website and as reported by Arch Daily, strive to preserve the existing character of the site rather than redevelop it. Under the alternative proposal, the existing buildings would be preserved and renovated with a focus on public space and inviting the arts. The new design calls for two distinct zones: the south zone would be devoted to education, research, green energy technology and commercial use while the north zone would consist of private museum, exhibition and theatre space that is accessible to the general public. The inherent hope of the new design is to use the Domino Sugar Factory site to create a whopping 700,000 sq. feet of public space for a massive cultural attraction that will invite millions of visitors per year while preserving the historic buildings.

While the HAO-generated designs are scenic and preserve the original feel of the site, they deny North Brooklyn a massive revitalization opportunity. Two Trees, the site’s developers, bought the area for $185 million and plan on pouring $1.5 billion into the Domino Sugar Factory area to build office space, 2,200 apartments and community amenities in place of buildings that are frankly falling apart. Among the current plans is a $50 million renovation and repurposing of the original refinery into office space that will essentially keep the exterior while gutting the decrepit interior. Also featured in SHoP’s design is a 5.25 acre waterfront park and plenty of open space for public use, which makes HAO’s proposal feel pretty lackluster when considering that it doesn’t include nearly as much commercial and residential space.

So what are the chances of the renderings by activists and HAO being considered? Well, the phrase ‘a snowball’s chance in hell’ comes to mind in light of the comments from Two Trees. David Lombino, Director of Special Projects at Two Trees, has said that the proposal is a wild fantasy that distracts people from the actual dialogue between the community and Two Trees. In fact, Lombino told Curbed that "We like rubber ducks as much as anyone, but this is not a genuine alternative and we are not looking for proposals for our property...We are committed to a real dialogue with the community, which has been ongoing for a full year, about affordable housing, open space, jobs and local retail.” Ouch.

The new renderings from HAO aren’t the first instance of community activists releasing their own renderings of a proposed development. Farther north in Brooklyn, Greenpoint residents have fought against the Greenpoint Landing development project with renderings that depict the proposed buildings as ugly and obtrusive but the jury is still out on that one.

If anything, the new renderings from HAO feel like a rallying point for cultural activists across the city after the preservationist defeat at 5Pointz, where activists fought a fierce uphill battle but lost after a judge dismissed their case to preserve the graffiti-plastered warehouses. Yet the authority of the counter-renderings by HAO, like that of the 5Pointz activists, is shaky at best and their renderings are unlikely to change Two Trees’ course.

Even so, everybody likes a pretty picture, no?