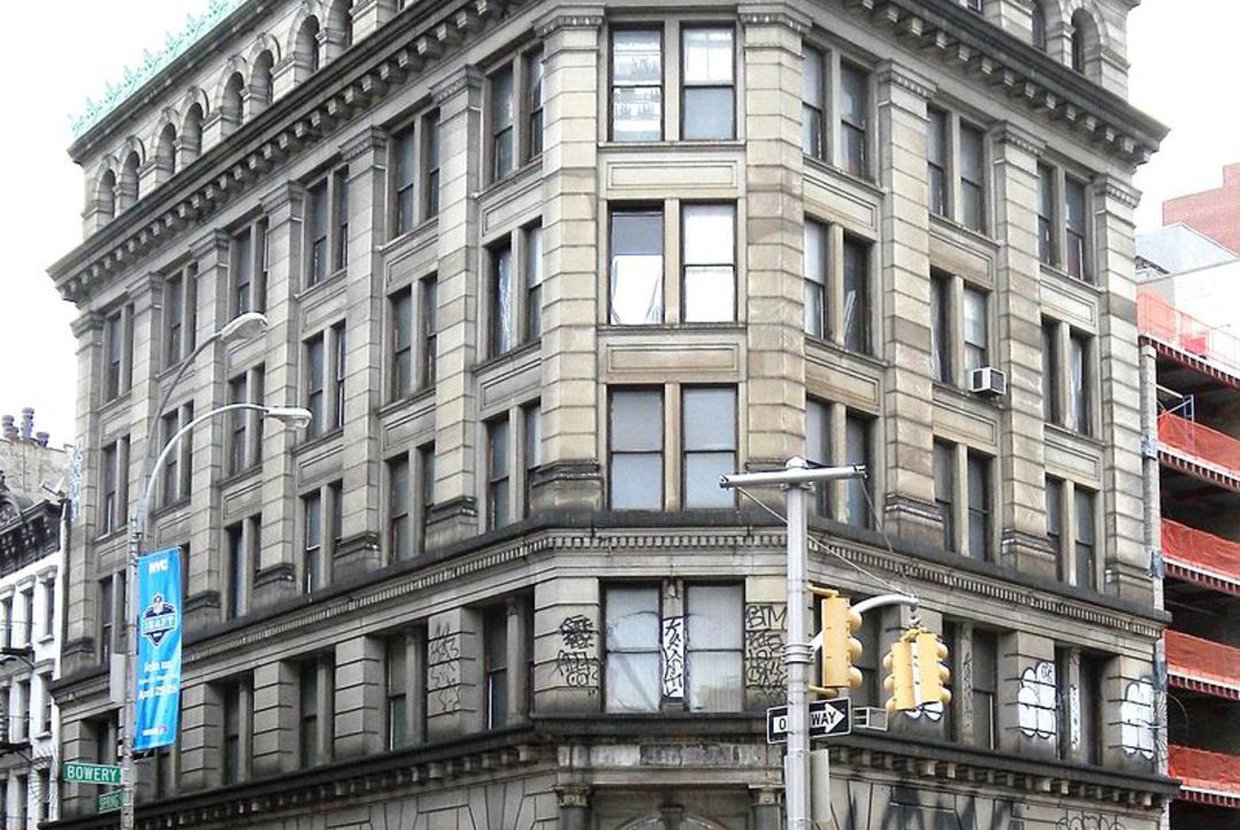 So much of what makes New York a unique cultural landscape is its historically rich tapestry of artistic and industrial architecture. Today’s hyper-modern, luxury development driven market, poses the question: Is there a way to maintain the integrity of iconic, often neighborhood defining and artistically stunning architecture with the constant demand and desire for growth and development? Can we successfully integrate the old with the new?

One of the last vestiges of the old, gritty, much romanticized New York of yore is 190 Bowery.  Anyone familiar with the stretch of skid-row turned luxe, industrial-chic destination knows the landmarked piece of architecture that spans the corner of the Bowery and Spring Street. It’s the history behind the heavily graffitied, endearingly derelict triangular facade that has remained a relative mystery in the neighborhood since the former Germania Bank was purchased by photographer Jay Maisel for $102,000 in 1966. He reportedly had difficulty maintaining the building as a single family home in recent years, and last year sold it for a reported $55 million to tycoon developer Aby Rosen. The mogul had plans to convert the mansion into condos, retail or possibly art space, but quickly flipped the property just months later.

Shortly after news broke that the property sold, NYC street artist Hot Tea voiced his opinion about the rapid transformation of historic buildings into luxury space with an installation on the building’s facade. It read simply “UUGGHH”.

This sentiment runs deep in many New Yorkers, especially amongst natives or those who share a history with the beautiful, unique structures that are the fabric of their neighborhoods and provide a visual story of eras long past.

190 Bowery is the most recent, buzz-worthy example of the endless conversion of historic sites into luxury condos and commercial space. Late last year, partial demolition of the Domino Sugar Factory began, altering an iconic piece of New York’s skyline. The building that displayed the eye-catching yellow Domino Sugar signage was destroyed and the sign removed, taking with it the architectural legacy of a seminal piece of New York history. For a duration after the Civil War, Williamsburg’s Domino Sugar Factory was the world’s largest sugar refinery, founded by German immigrants William and Fredrick Havemeyer in 1816, and employed immigrants from many countries ever since. The refinery encapsulated immigrant life in New York across generations and served as a reminder of the Industrial Age that first launched New York to its glory.

The rebuilding and conversion of the partially demolished factory into a residential-office-retail-park-and-school complex is slated to be happening now, the main building being converted into commercial space for creative and tech companies. A 2,300 unit apartment complex will take over the rest of the site, 700 of those to be classified as affordable housing.

Local outcry over the destruction of the refinery led to a community organization, rather fatefully named http://www.savedomino.org. Though they were unable to succeed in their cause, the site now offers commemorative silkscreened prints of the factory.

For urban planning’s part, some of the factory’s gritty glory will be maintained. Upon completion of the reconstruction, the iconic yellow Domino Sugar epithet will be affixed the shiny new refinery, a visual marriage of old and new.

In what feels like a rebuttal to the sentiment that New York’s history is being destroyed so that the wealthy have squeaky-clean, hyper-modern stomping grounds, Mayor De Blasio’s State of the City speech last week contained a mission to earmark 1,500 units of affordable housing for artists. His announcement brought attention to its prototype, recently renovated El Barrio’s Artspace PS109.

The five-story, neo-gothic chateau, in a portion of East Harlem known as El Barrio, was given a major community-driven restoration last year to turn the abandoned school into an arts center, complete with 89 affordable work and housing units for artists. The project provides affordable housing for a neighborhood whose residents risk being priced out when gentrification takes over, without compromising the architectural integrity of the building or its artistic impact on the community. De Blasio’s initiative is part of the city’s goal to ensure 200,000 affordable housing units over the next 10 years. The 1,500 units designated for hard-working, middle-class artists will be constructed in tandem with 500 below-market work spaces serving as an artistic cultural epicenter. The initiative’s goal is to keep New Yorkers in the creative sector from being priced out of a city that thrives on artistry, and is an excellent example of how growth and development can cohabit with artistic and historical integrity.

So the question remains: Can New York effectively meet development and growth demands while still maintaining the architectural and historical integrity of existing neighborhoods?

While the widespread sentiment is that neighborhood redevelopment has often been at the ruination of a gritty, arts-driven, culturally unique environment, it has also brought many people into neighborhoods that otherwise wouldn’t be on their radar. They have come not only to live but also to spend their time, dining out or experiencing cultural activities in neighborhoods they may not otherwise have been drawn to. Whether this is positive or negative is a matter of very intense opinion, but if neighborhood renewal strives to make connections to the past and existing residents can maintain a vibrant community, it seems highly possible to integrate artistic history of the old with the the ultra-modern of the new.