This week, TBT is taking a peek into the past (and present) of some of NYC’s historic and architecturally important luxury condos.

When this stunning homage to neo-gothic art deco was built in 1913, it was the tallest building in the world. The Woolworth Tower, a National Historic Landmark in Tribeca, was the vision of innovative retail mogul Frank W. Woolworth, who commissioned MIT schooled architect Cass Gilbert to build the masterfully crafted ‘Cathedral to Commerce’.

The skyscraper was such a national achievement that President Woodrow Wilson himself pushed the button to light the tower for its inauguration.

Today, world renowned restoration designer Thierry Despont, whose accolades include The Carlyle New York, The Ritz Paris and the Statue of Liberty, has focused on an architectural celebration of the past, restoring every bespoke detail and gilded flourish to its original stately grandeur.

The 34 regal residences that preside over the top floors of the Woolworth Tower Residences have a residents-only lobby at 2 Park Place with private elevators leading up to masterfully designed interiors. Herringbone oak flooring, elegant millwork kitchens with integrated Miele appliances, maple wood moldings and and Crema Marfil and Emperador marble and Statuary slab stone all evoke the art deco spirit of the Woolworth Tower’s iconic history. 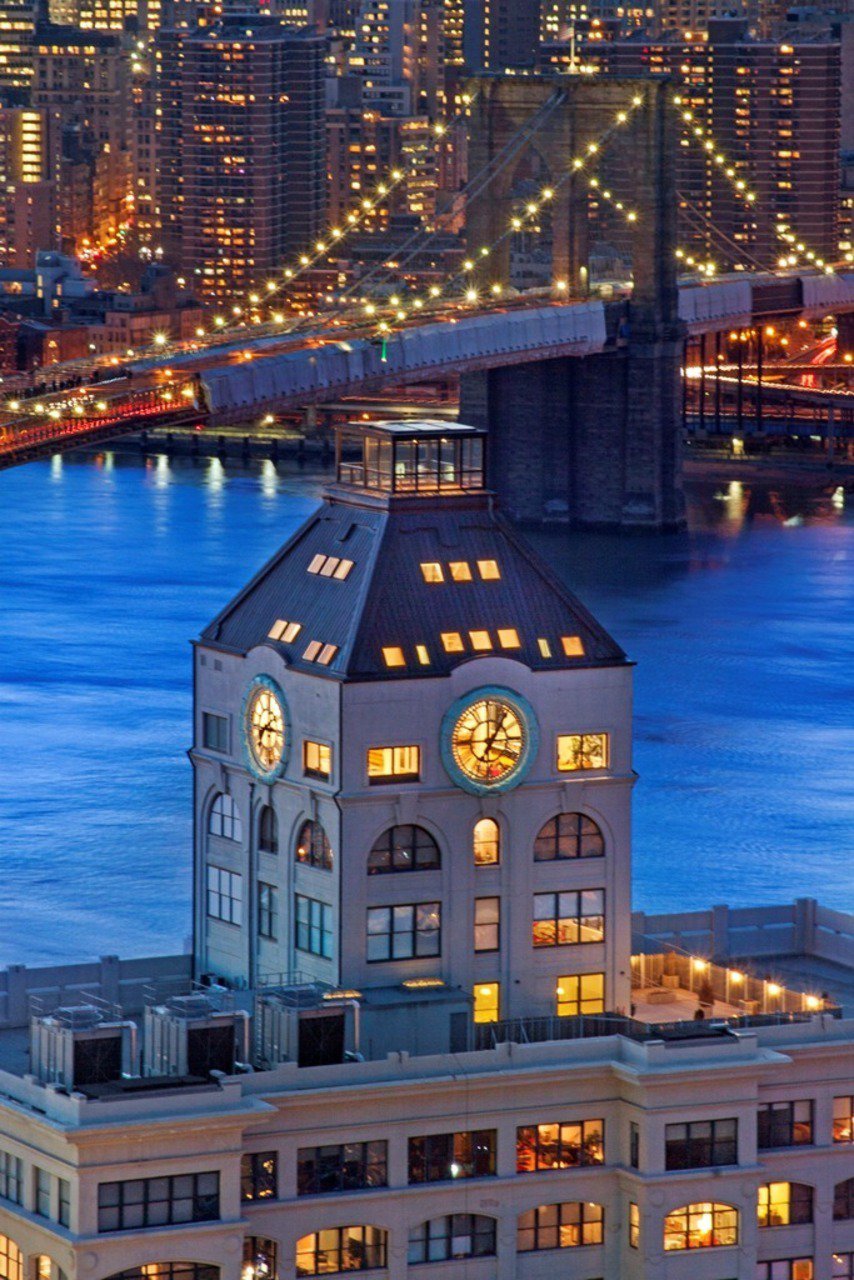 This iconic fixture of Brooklyn’s skyline was built in 1915 as a cardboard box factory, and the magnificent clock tower has remained its architectural centerpiece. The area around its 1 Main Street address has been historically industrial, almost exclusively housing warehouses and factories for most of the 20th century. Artists began moving into the former Fulton Landing neighborhood in the 1970s when prices in Manhattan lofts started rising. Its neighborhood name changed in the late ‘70s, when these artists coined the acronym DUMBO (Down Under the Manhattan Bridge Overpass) in hopes that such an unusual name would deter developers. The strategy had the opposite effect, and today DUMBO is one of the most prestigious and sought after neighborhoods in Brooklyn.

After Mayor Giuliani’s rezoning of large swaths of industrial areas in the late ‘90s, Developer David Walentas redeveloped The Clocktower Building into luxury condos while maintaining its unique architectural integrity. The architectural focus is on light, airy modernity. Apartments feature open stainless steel kitchens, marble baths with Jacuzzis, solid strip oak flooring and lofted ceilings. Needless to say, the crown jewel of the building is its Clocktower penthouse. The triplex has soaring windows that offer incomparable, panoramic 360 degree views of Manhattan and beyond. The four iconic 14-foot glass clocks encircling the space are utterly breathtaking, as are the views they offer. The ceilings soar to 50 feet in parts of the penthouse. The master suite offers a sweeping panorama of lower Manhattan, while the en-suite bath features stunning views of the Statue of Liberty and The Manhattan Bridge. There is a private glass-enclosed elevator, dramatic wraparound staircase, skyroof, open deck and cabana. 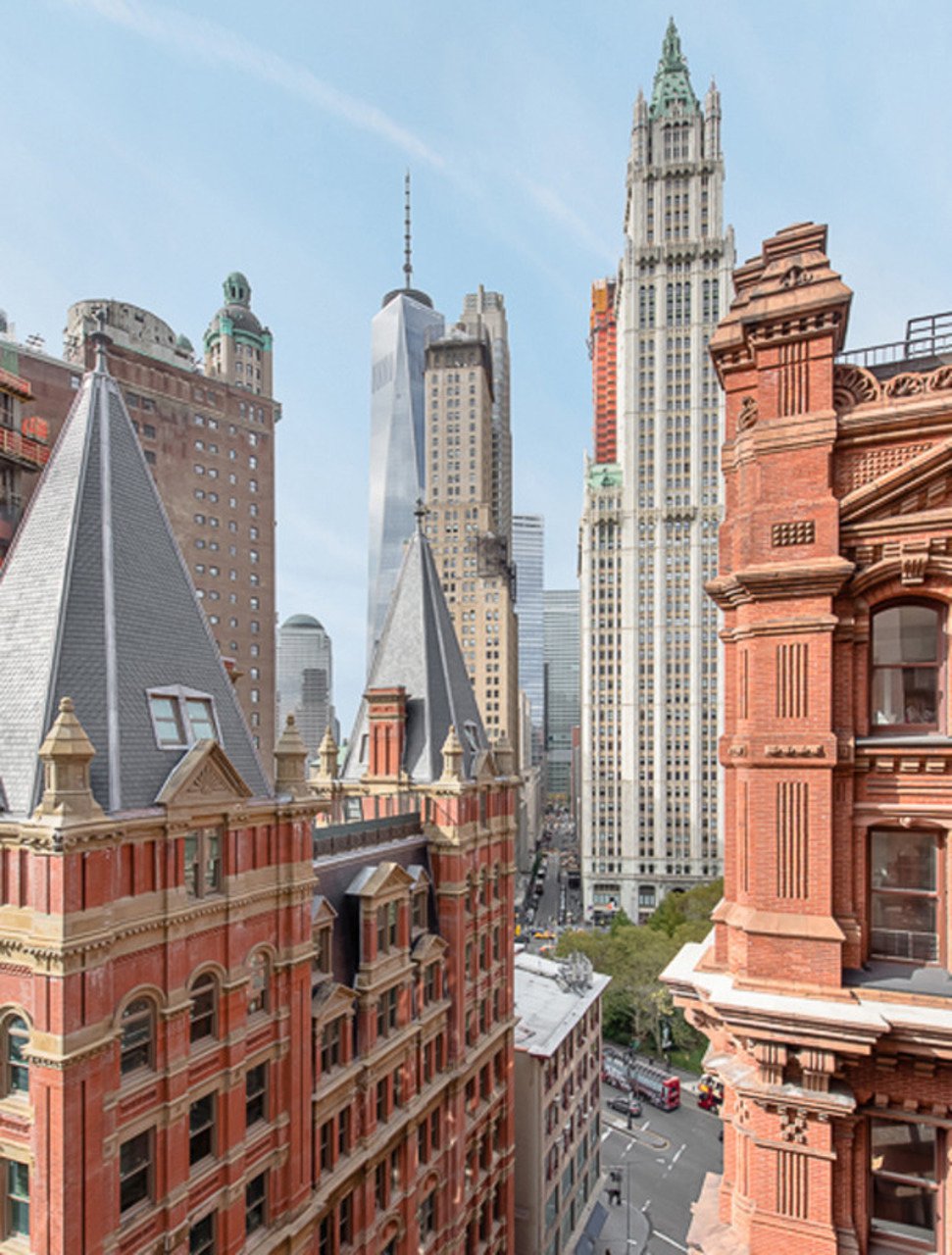 It’s hard to imagine in today’s forest of glass towers, but when the 10-story Morse Building was built just south of City Hall Park in 1879, it was one of New York’s tallest buildings. The Victorian Gothic red and black brick and terra cotta clad facade contrasts dramatically with its Romanesque arches, making it architecturally unique. It was named for Samuel F. B. Morse, the inventor of the telegraph who was also the builders’ uncle.

Before it was converted to co-ops in 1980, its roster of tenants included The New York Canoe Club and the American Vitagraph Company, an early motion picture studio.

The Morse Building sits at 140 Nassau Street in the Fulton-Nassau Historic District of the Financial District, and in 2006 was designated a NYC Landmark by the Landmarks Preservation Commission. 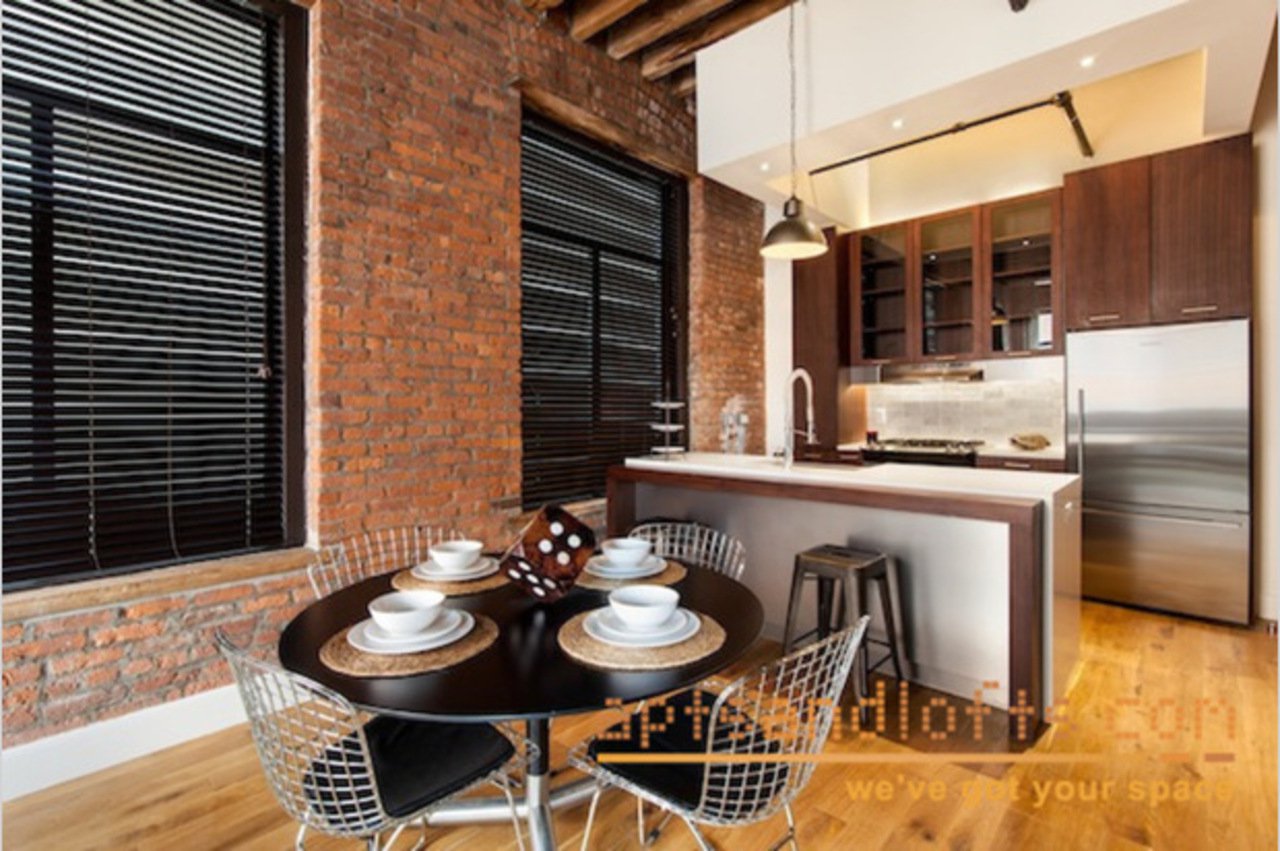 The Printhouse Lofts were built in 1910 in heavily industrial North Williamsburg and were originally intended for warehouse use. The building later became a toy factory and later, its namesake, a printing house. This factory building at 139 North 10th Street has remained an architectural reminder of Williamsburg’s industrial roots, and recently was converted into 36 luxury apartments. The concept of the Printhouse Lofts is rooted in an appreciation and respect for the industrial architecture that so greatly influenced the growth of New York City. Artifacts are showcased with flourish, like the tastefully rusted antique printing press that graces the lobby’s modern, concrete floor. The lofts were built with preservation and authenticity in mind. Apartments feature soaring timber beam ceilings, restored wood columns and walls of original exposed brick, weathered, wood planked window sills and exposed pipes. These authentic industrial features marry seamlessly with modern touches, such as farmhouse style kitchen sinks with coil spring faucets, stainless steel appliances, dark walnut cabinetry and high-end finishes throughout. Fixtures like the industrial-inspired naked bulb sconces evoke an antique, industrial feel while still being thoroughly modern.