#TBT: The Hotel Chelsea; From Beatnik Enclave to Boutique Hotel 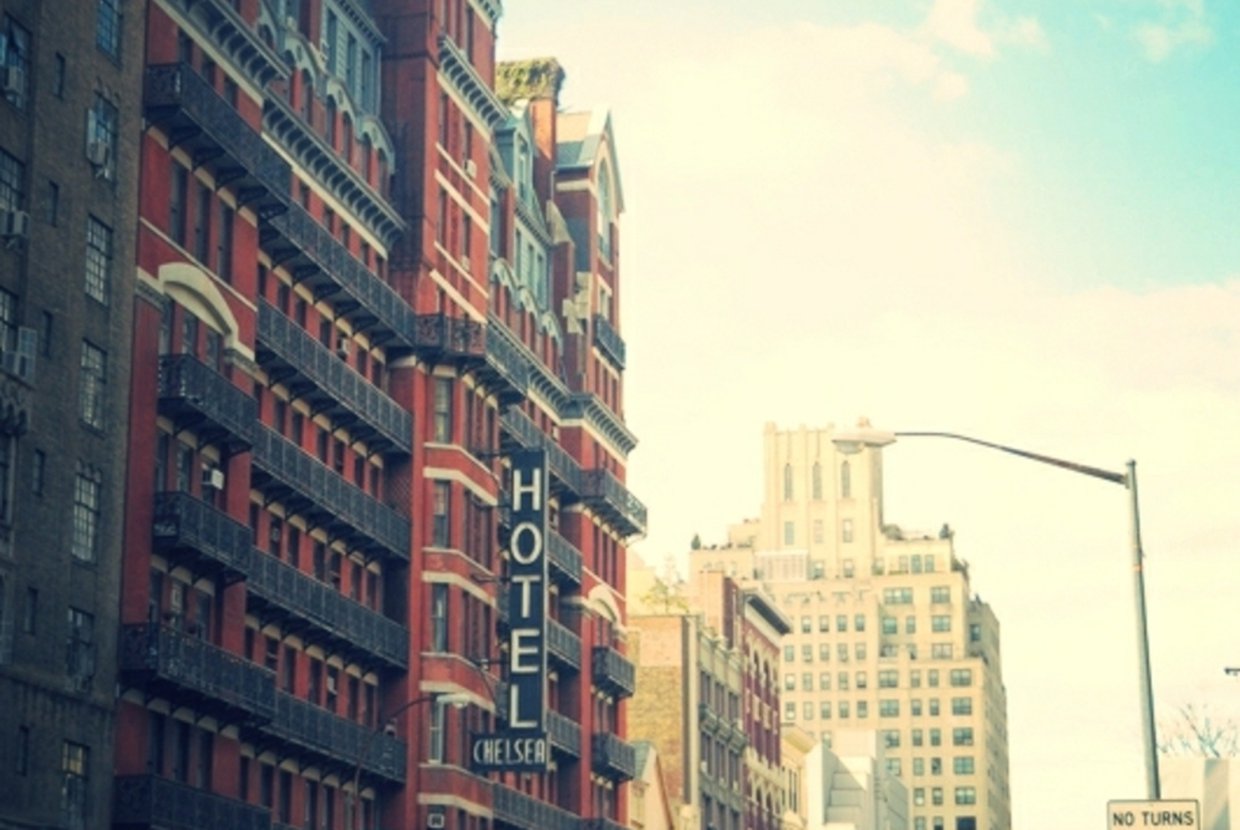 Last week, The Wall Street Journal reported that the redevelopment of the storied Hotel Chelsea is experiencing some serious setbacks.

Problems include development being vastly over budget, more than a year behind schedule, and contention between the owners over the cost of upgrades and how to position the hotel as a deluxe contender.

The owners in question include William Ackman, founder and CEO of Pershing Square Capital Management LP, Joseph Steinberg, chairman of Leucadia National, and real estate investment firm Wheelock Street Capital. The team formed in 2013 with the purpose of taking over the hotel, which has been in disrepair for decades.

Longtime clubhouse of the counterculture, The Hotel Chelsea has a history of playing host to such avant-garde artists as Bob Dylan, Leonard Cohen, Arthur Miller, and infamously, Sid Vicious and doomed girlfriend Nancy. What the story behind this landmark hotel that became the breeding ground for cutting-edge artists living on the edge?

Built in the 1880s, the Victorian Gothic red brick hotel was originally for private co-op residences in Chelsea, which was at the time the city’s Theater District.

Almost inconceivable now, but at twelve-stories, it was the tallest building in New York when it was constructed. The interior architecture showcased stunning Queen Anne-style architecture. Many of those flourishes, such as the grand staircase and cast iron balconies, remain today.

The co-op turned into a hotel in 1905 though people were still able to live in the rooms there. The families that owned it were advocates and patrons of the arts, with accommodating rent- collection that allowed tenants to pay rent in installments. They were even known to have accepted a tenant’s artwork as payment.

Because of this generosity and patronage of the art world, the Hotel Chelsea became an enclave for musicians, literary figures, painters, and all array of artists.

Thomas Wolfe and O. Henry were tenants in the early 1900s, but it was in the 60s that the hotel really became an incubator of the avant-garde, attracting a wide array of bohemians artists who saw the Chelsea as a muse of sorts, and often produced some of their greatest work while residing there. Bob Dylan wrote “Visions of Johanna” during his stay. Sir Arthur C. Clarke penned “2001: A Space Odyssey” while living there, and Allen Ginsberg often held beatnik intellectual sessions at the hotel. Leonard Cohen wrote a tribute song to it, “Chelsea Hotel No. 2.”

In homage to its patrons, the hotel has displayed much of the visual art of its tenants, including Jasper Johns, Willem De Kooning, Jackson Pollock, Frida Kahlo, and Robert Mapplethorpe.

The Hotel Chelsea was synonymous with Andy Warhol, and regulars of his Union Square studio The Factory resided there, including his muse Edie Sedgwick. In 1966 Warhol directed Chelsea Girls, the cult classic film about the lives of his Factory regulars living in The Chelsea.

Sadly, and famously, The Hotel Chelsea was not just a source of inspiration for the artists who frequented it. It is infamously the location of many of its tenants demise. Dylan Thomas died there of (alleged) alcohol poisoning in 1953 after drinking copious amounts of whiskey at The White Horse Tavern.

And then, of course, there’s the tragic Sid and Nancy. In October 1978, Sex Pistols bassist Sid Vicious and his girlfriend/manager Nancy Spungen were living in Room 100 of The Chelsea Hotel. On the morning of October 13th, Nancy was found stabbed to death on the floor, surrounded by their drug paraphernalia. Having made a quasi-confession at the hotel while very obviously high, Sid was arrested for her murder and spent a few months at Rikers Island before being released on bail. He died from a heroin overdose that very night.

So how did this notoriously troubled, yet illustrious hotel end up in the middle of a bitter property dispute?

The owners have spent roughly $185 million in the acquisition and renovations necessary to transform it into a 120 room deluxe hotel, but plans are not running smoothly. Slated to reopen in 2017, the renovations are costing millions per month on top of interest. They recently brought in another equity partner and are refinancing their debt. On top of all that, the current rent-stabilized tenants are not exactly going quietly into a modernized night. For better or worse, many of these longtime tenants don’t want to see their iconic home changed at all. Sean Hennessey, CEO of hotel consulting firm Lodging Advisors explains this unique conundrum. “That combination makes for a project that is more expensive than the typical renovation, and perhaps more than they may have first realized.”