FDR Four Freedoms Park: Even a Brick Wants to be Something 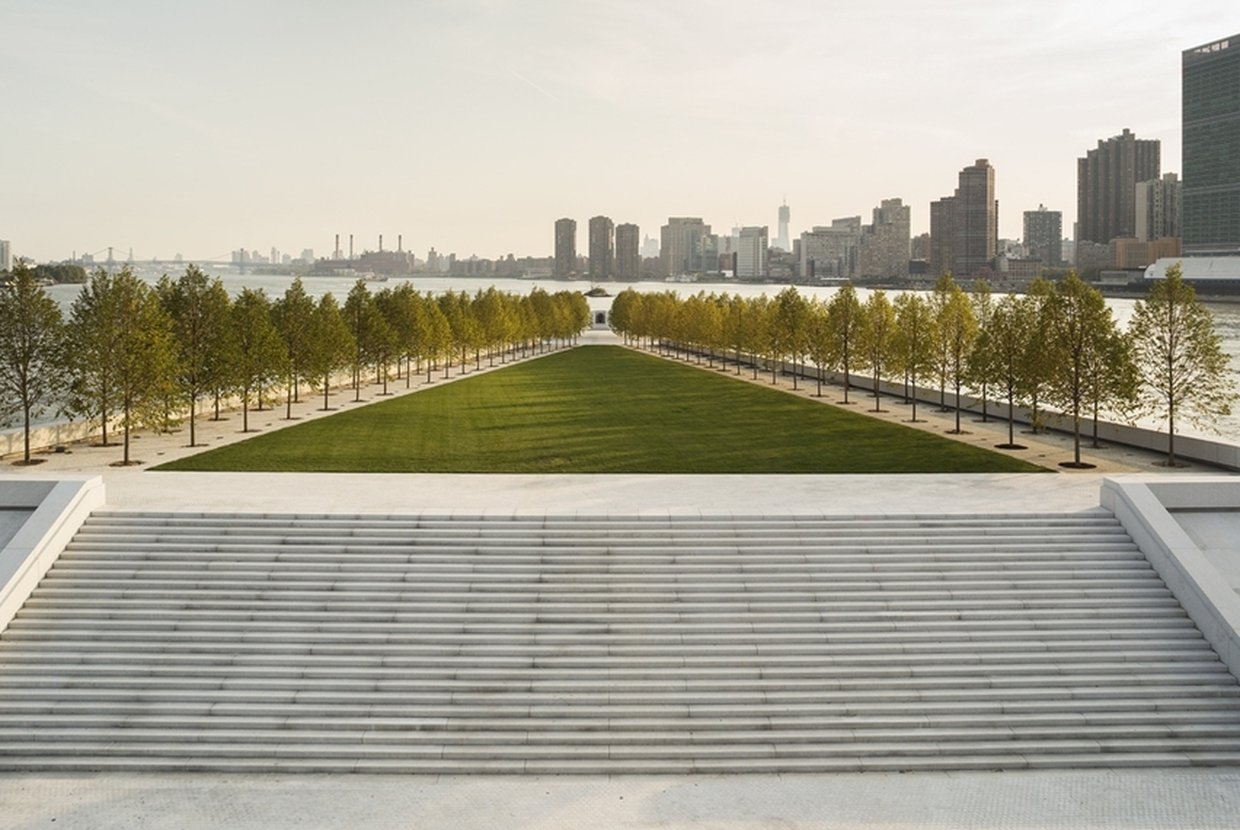 A little bit about the Island itself.

Roosevelt Island had gone by many aliases by the time it was renamed after the 32nd President of the United States in 1973. The island has an extensive history: it functioned as a Dutch hog farm to was used to exile the sick, prisoners, and vagabonds from Manhattan. It carries its historic past to this day, but will soon transform into a luxury island.

Hospital to ruins in a little over a century. The Smallpox Hospital was built in 1856 and designed by James Renwick Jr., and at the time, Roosevelt Island was known as Blackwell’s Island. The Gothic Revival–style hospital accommodated patients infected with the contagious smallpox. And though this hospital was not exclusive to charity cases, the hospital treated many new immigrants who didn’t have much money.

Today, the hospital is a closed-off site called Renwick’s Ruins, with plans for a $4.5 million renovation project underway. 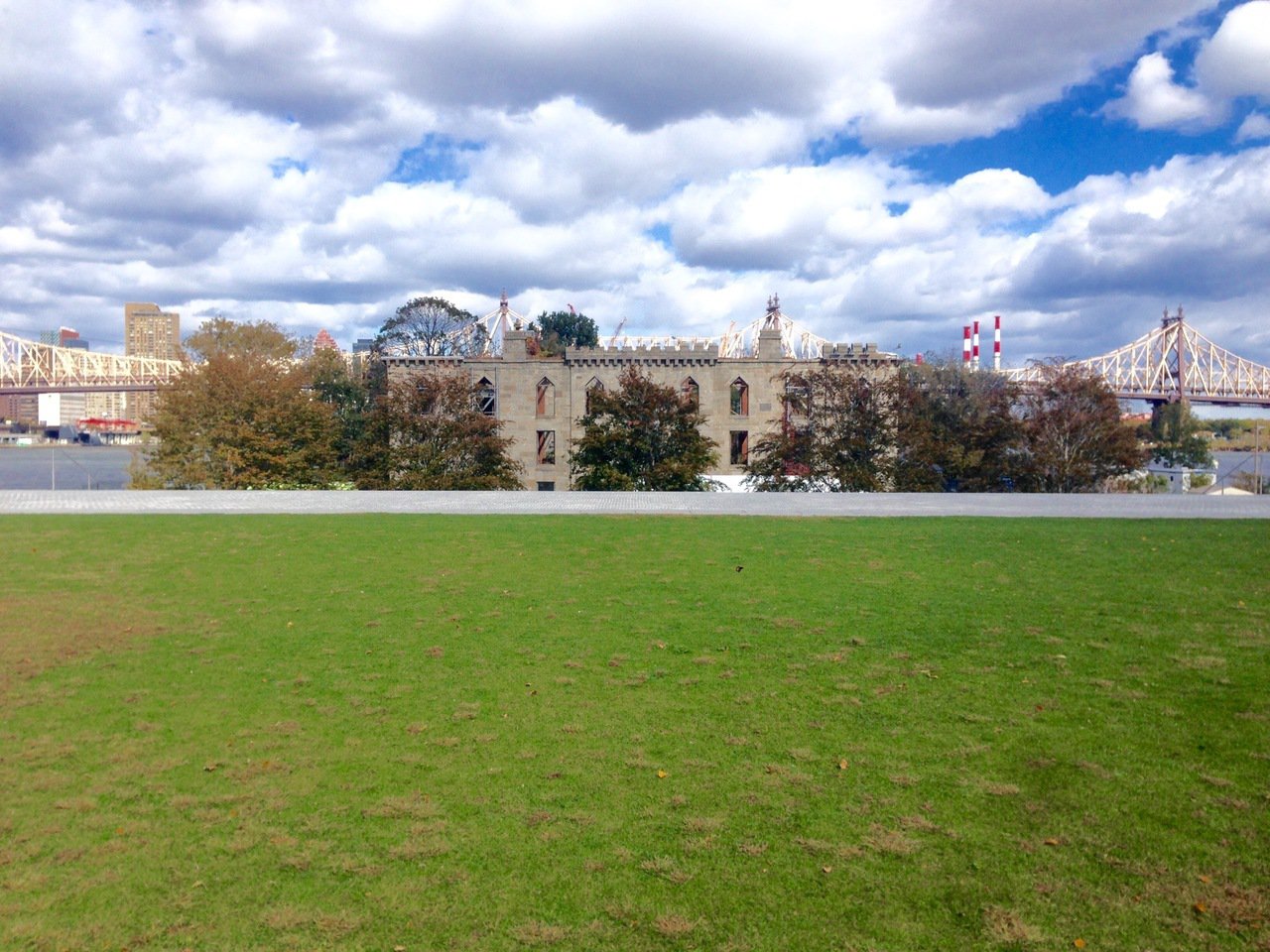 The breathtaking view of the Queensboro Bridge's crowning peaks, from the lawn of the Smallpox Hospital, will be limited upon the completion of new developments.

The Four Freedoms speech is also known as the eighth State of the Union, addressed by President Franklin D. Roosevelt on January 6, 1941. The speech was a call-to-arms in hopes that the American people would be encouraged to go against the Axis threat and support allying nations fighting in World War II. FDR declared in his speech an immediate increase in American arms production and asked the people to support his “Lend-Lease” program, which assisted the Allies in the war with US munitions. But since World War I, the US had isolated itself from foreign affairs, and engaging in World War II was the last thing the nation wanted to do.

In his plea, he shared his vision for the world. He outlined the four essential human freedoms: freedom of speech and expression, freedom of worship, freedom from want, and freedom from fear, and FDR declared that these freedoms must triumph everywhere in the world. President Roosevelt was considered the Architect of the United Nations.

Watch this short clip from the Indecent Proposal (1993).

Franklin D. Roosevelt Four Freedoms Park was designed by one of the greatest modernists of the 20th century, Louis Kahn. His distinct architectural style is deeply inspired by a combination of Ancient Greek and Egyptian architecture, with a touch of modern minimalism. Kahn’s abstract design of the Four Freedoms Park honors FDR’s vision of the world.

Kahn was prominent for his innovative work. Unfortunately, FDR Four Freedoms Park was Kahn’s last design. He passed away in 1974, shortly after designing the park. First opened to the public in 2012, the park’s features are exactly to Kahn’s vision (with minor adjustments for legal reasons).

Louis Kahn gave every brick a reason to exist. The park’s riprap is considered to be “designer”, because each granite gneiss that make up the 11,000 cubic yard rock barrier is hand-placed. The gneisses are specifically placed to hinder water from touching the white granite, preventing erosion.

The white granite that creates the structures of the park was quarried from Mount Airy, North Carolina, a specific request from Kahn. The white granite is extremely sensitive to stains, and almost impossible to get out — to the point that they would have to replace the entire stone. The body of the park is a lawn and Kahn’s design emphasizes its triangular shape. Exploring the park and moving around, Kahn plays with the human eye and implements optical illusions within his architectural design that’ll keep you gazing in wonder. From this position, there’s a forced perspectival that draws visitors’ attention to the center: the colossal statue of FDR. Because of the combination of the lining of linden trees and the geological structure of the park, the monument appears infinitely farther away.

“President Roosevelt won me completely with his charm, his beautiful voice and his freedom from constraint. He had an unshakable faith in man…” -Jo Davidson This large, bronze monument of FDR’s head is a 6 ft tall, 1050 lb replication of the original life-sized clay version that Jo Davidson designed at the White House in 1933. Looking at it straight from the front, it looks as if the head is floating; but focus on his expression, many people think different on what FDR is trying to express.

“I had this sense, you see, and the Room wasn’t just architecture, but was an extension of self.” - Louis Kahn 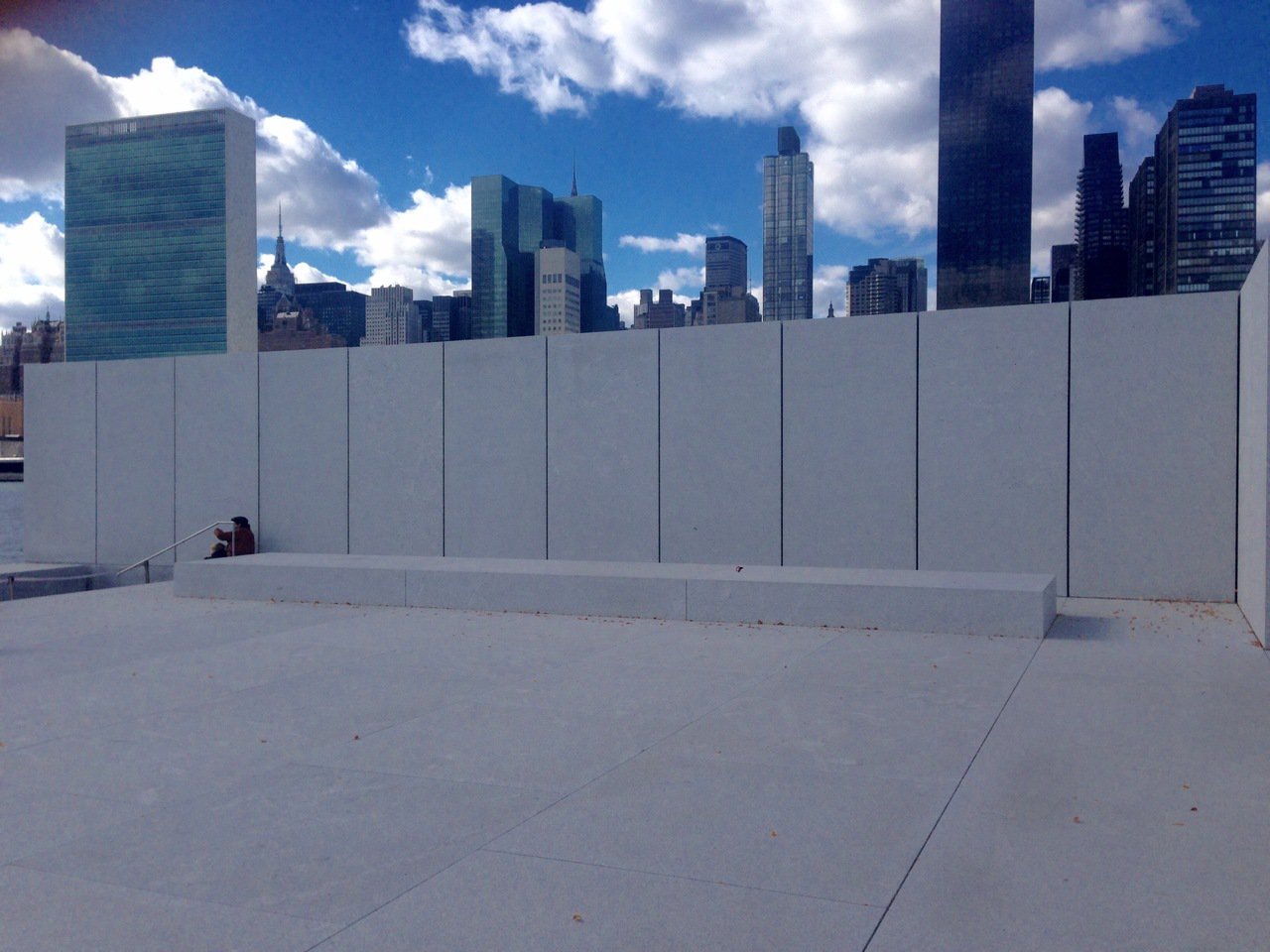 Behind the FDR monument is Kahn’s “Room”, a space with which he intended to inspire. The construction of the Room is considered the heaviest stone-setting job performed in New York City. It took five different types of cranes and lifts, and about 100 trained stone setters to set 190 blocks of white granite to make up the Room. 70 of those are 6x6 ft, 12 ft tall, 36 ton monolithic blocks (and note that the process of tripping the colossal blocks has not changed since ancient Egypt) set an inch apart, and in between the gaps there is this amazing ripple effect that is created by the granite’s reflection. 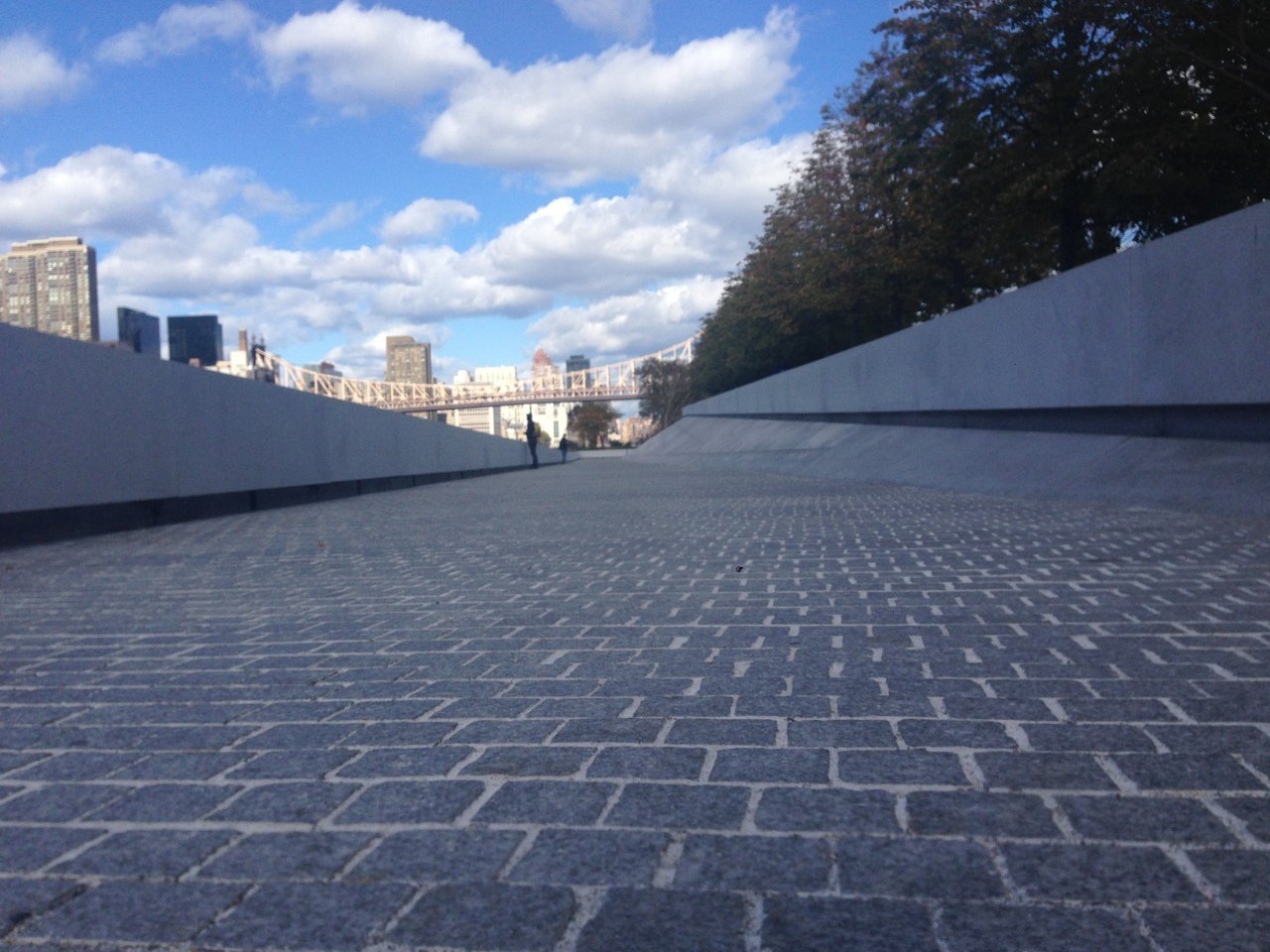 This ramp has an illusory effect: with the trees kept at the same height and slope of the ramp, the human mind is tricked into thinking that, people halfway down the ramp appear to be walking slower.

December 10th of every year is National Human Rights Day, and 2015’s theme is the Four Freedoms, so be sure to visit FDR Four Freedoms Park.