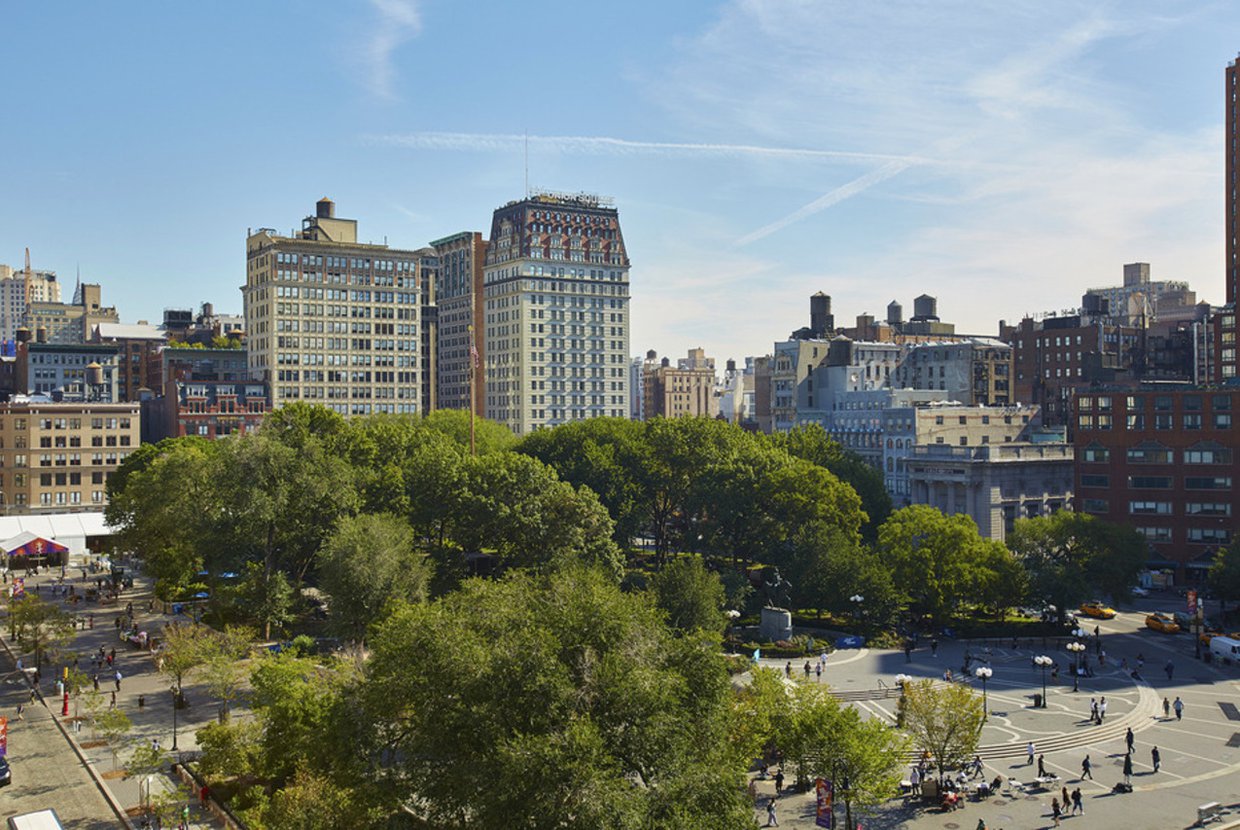 Last week, the Landmarks Preservation Commission (LPC) made headlines for an atypical reason; they held a public meeting to oppose Union Square designation as a historic city landmark with preservation status. You may be asking why the nation’s largest municipal preservation organization would be against granting this to one of the city’s most famous parks.

In short, the LPC, the Historic Districts Council (HDC), and even the Union Square Community Coalition, believe that designating Union Square Park in its current condition would be a historical misrepresentation.

The general consensus by preservationist groups is that while the park is famous and popular, it’s also very historically flawed. As Kelly Carroll of the HDC stated, “With two centuries of changes to the park, it is difficult to determine original historic fabric; moreover, what fabric from which period of time.” Carroll explained further: “The north plaza no longer is an uninterrupted expanse, undermining its claim to fame. Because of the lack of historic integrity, HDC does not support the designation of Union Square as a New York City Scenic Landmark.” Jack Taylor of the Union Square Community Coalition summarized the viewpoint of preservationists citywide, proclaiming that to designate the park as it exists today “would be a historical travesty.”

Already a National Historic Landmark, what is the history of this controversial park that has seen so much cultural activity and physical change?

Union Square is flanked by Chelsea to the west, the Flatiron District to the north, Greenwich Village to the south, and Gramercy to the east. Its etymology comes from the joining of 14th Street with Bowery Road (now Fourth Avenue), and dates back to 1815, when the one-time potter’s field was turned into a public commons.

Gramercy Park developer Samuel Ruggles acquired a 50-year lease of the surrounding lots in order to build curbs and sidewalks. He sold most of the his leases afterwards, and built a four-story row house overlooking the park. Other wealthy New Yorkers took his lead, and soon Union Square was lined with affluent homes. A scenic fountain was built in the park in 1842, and the famous equestrian statue of George Washington was erected in 1856, marking the first public sculpture unveiled in New York City since the United States won its independence; the statue depicts the day in 1783 when General Washington led his troops back into the city after the British retreated. On September 5th, 1882, the first Labor Day celebration took place in Union Square, and this massive parade of 10,000 workers is why the park was finally named a National Historic Landmark in 1997.

Union Square became the city’s theater district in the 1860s and remained the hub for actors, theater production companies, and booking agencies until the Theater District relocated to Midtown in the late 1800s.

Union Square was almost completely demolished in the 1920s to build its underground subway concourse, and is one of the reasons that preservationists point to today as the alterations that make the park unfit for preservation status.

Misuse and drug activity in the 1960s and ‘70s led to the park’s deterioration, and both the park itself and the neighborhood around it were essentially a wasteland during this time, although it did attract the superstar pop art movement of the time. From 1968–1973, Andy Warhol’s infamous studio, The Factory, was located in the Decker Building at 33 Union Square West.

The Union Square Greenmarket was created in the 1970s by GrowNYC, a not-for-profit that tackles environmental and quality of life issues in the city. The Greenmarket was the first step in breathing new life into Union Square. Then, in 1985, restaurateur and pioneer Danny Meyer opened Union Square Cafe on a desolate stretch of 16th Street, and with his incarnation of the casual fine dining genre, transformed Union Square into a destination spot and a bonafide neighborhood.

When The Zeckendorf Towers opened their luxury residential doors overlooking at 1 Irving Place in 1987, the neighborhood reached its cultural tipping point.

These days, Union Square is jam packed from dusk till dawn with NYU students, Whole Foods shoppers, street performers, and that endless line from Trader Joe’s.

What then, is the fate of the park’s historic preservation designation? It appears as if its status will hang in limbo for another year, as the LPC will have meetings to vote for or against in the next 13 months.