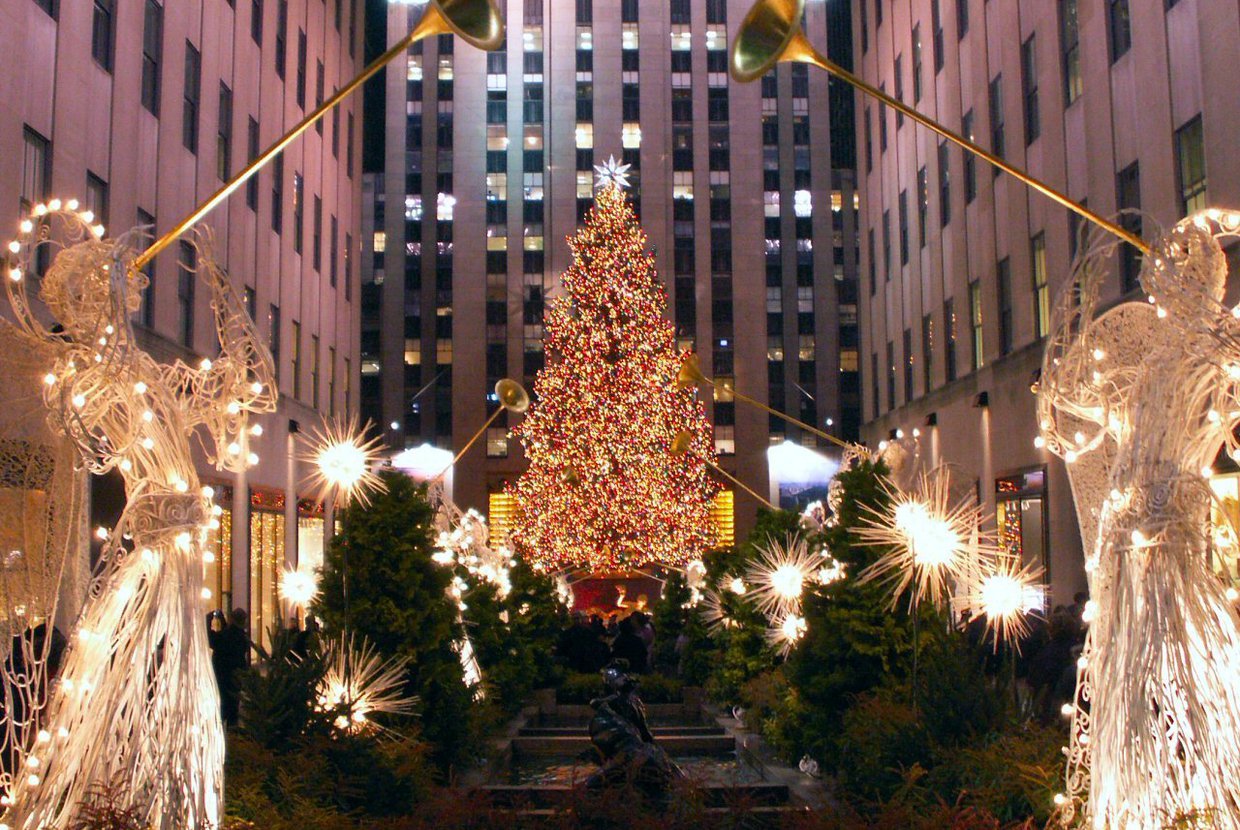 The weather may not reflect it, but it’s Christmas time in the city — and that means tourists flocking to Rockefeller Center in droves, and the rest of us trying our best to navigate the swath of Midtown between Fifth and Sixth Avenues amidst the holiday crowds. That said, Rockefeller Center is the epicenter of New York City yuletide cheer, and its iconic Christmas tree, skating rink, and Top of the Rock observation deck are recognizable worldwide. How did 30 Rockefeller Plaza become synonymous with Christmas here anyway, and what’s the history behind this essential New York landmark?

Rockefeller Center was the brainchild of John D. Rockefeller, Jr., and the project, which opened in 1933, was the single business venture amidst a career dedicated almost entirely to philanthropy. His intent was to create a stylish hub of art, culture, and entertainment that would bring people together during the economic turbulence of The Great Depression, and which would reflect the era’s urbanist opinion that appreciation of the arts fostered good citizenship. Its grand lobby was decorated by famous European artists of the time, and its earliest tenants were the Librarie de France and the brand new publication News-Week, as it was then called. The lavishly Art-Deco Radio City Music Hall opened two days after Christmas 1932, and the infamous Rainbow Room opened its luxurious supper club two years later.

Rockefeller, who had originally conceived of an opera house for The Metropolitan Opera for space, before the stock market crash of 1929 caused him to rethink his plan, financed the entire project himself. Its construction was the largest private project ever built in America to date.

The first tradition of Rockefeller Center, the annual Christmas Tree, began before the project was even complete. On Christmas Eve 1931, construction workers on the site hoisted a 20-ft tree on the muddy grounds to bring a little cheer to the very dismal morale the city faced because of the Depression. The official lighting of the tree was organized in 1933.

During WWII, the tradition of the tree altered somewhat due to wartime efforts: in 1936, three small trees were lit in patriotic red, white, and blue, and in 1944, blackout procedures restricted the tree from being lit at all. The tree made its television debut on the Howdy Doody Show in the early 1950s.

It was during the television and movie boom of the ‘50s that Rockefeller Center became more and more of the city’s entertainment nucleus, which was spearheaded with the debut of The Today Show in 1952.

After the death of John D. Rockefeller, Jr. in 1960, his philanthropic endeavors endured in the building he created. Rockefeller Center initiated a shelter program as a result of the rise of the Cold War. Meanwhile, Radio City hosted record-breaking runs for performances like “The Odd Couple” and “Bye, Bye Birdie”.

Like everywhere in New York City, the real estate downturn of the 1970s were hard on Rockefeller Center, which found itself with vacating tenants and a decline in its cultural relevance as musical tastes shifted attention away from the productions Radio City typically attracted. Even so, Rockefeller Center was awarded prestigious recognition by The American Institute of Architects, who deemed it one of the most architecturally significant buildings in America, second only to the University of Virginia.

The economic prosperity of the ‘80s breathed new life into the plaza: it made its IPO on the Stock Exchange and the Rainbow Room reopened after a $20 million renovation.