Ain’t Nothing Going On But the Rent 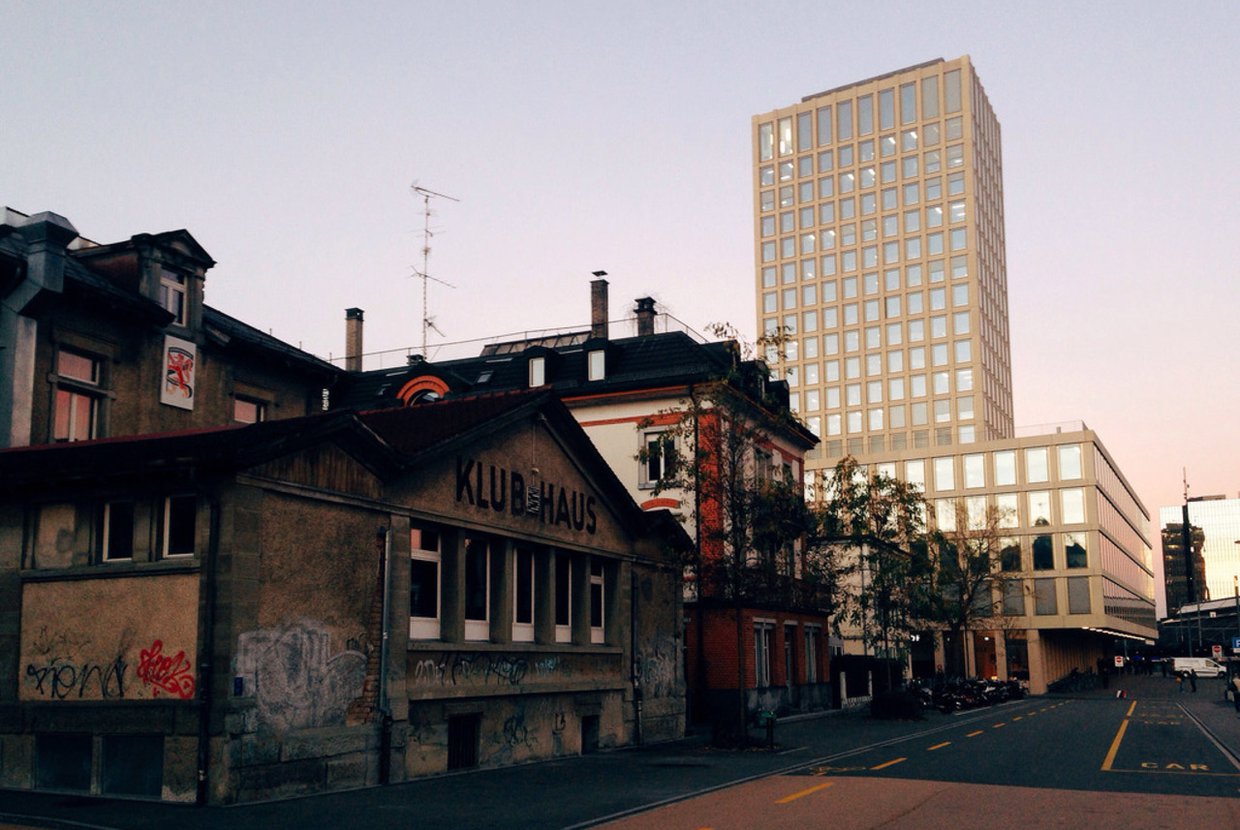 Gentrification is a controversial subject in the national discourse, often eliciting impassioned responses from both sides of the issue. For some it is a process of urban renewal and the economic development of decaying areas, while others stress exorbitant rents and the displacement of poorer communities. The one thing that is not subject to debate, however, is the reality of the phenomenon—Gentrification is as real a force as gravity, and the structural changes it brings to urban society are observable and quantifiable over large periods of time.

Last month, the NYU Furman Center released its 15th annual State of New York City’s Housing and Neighborhoods in 2015 report, which included a detailed analysis on gentrification and demographic shifts in New York City neighborhoods. Using data from the U.S. Census Bureau and other sources, the report defines gentrification as “rapid rent growth in low-income neighborhoods.” Gentrifying neighborhoods are defined as areas which were low-income in the 1990’s, but subsequently had a relatively higher growth than the median of all sub-boroughs over the next two decades. The criterion for being low-income is whether or not a neighborhood's average household income was in the bottom 40% of the city. Of the 55 sub-borough areas that the study looks at, 22 were considered low-income in 1990, and, astoundingly, 15 of them have experienced gentrification since then. 33 sub-borough areas were high-income in 1990 and remain in that bracket today. Only 7 of the 55 have not experienced the upheaval of gentrification, yet. 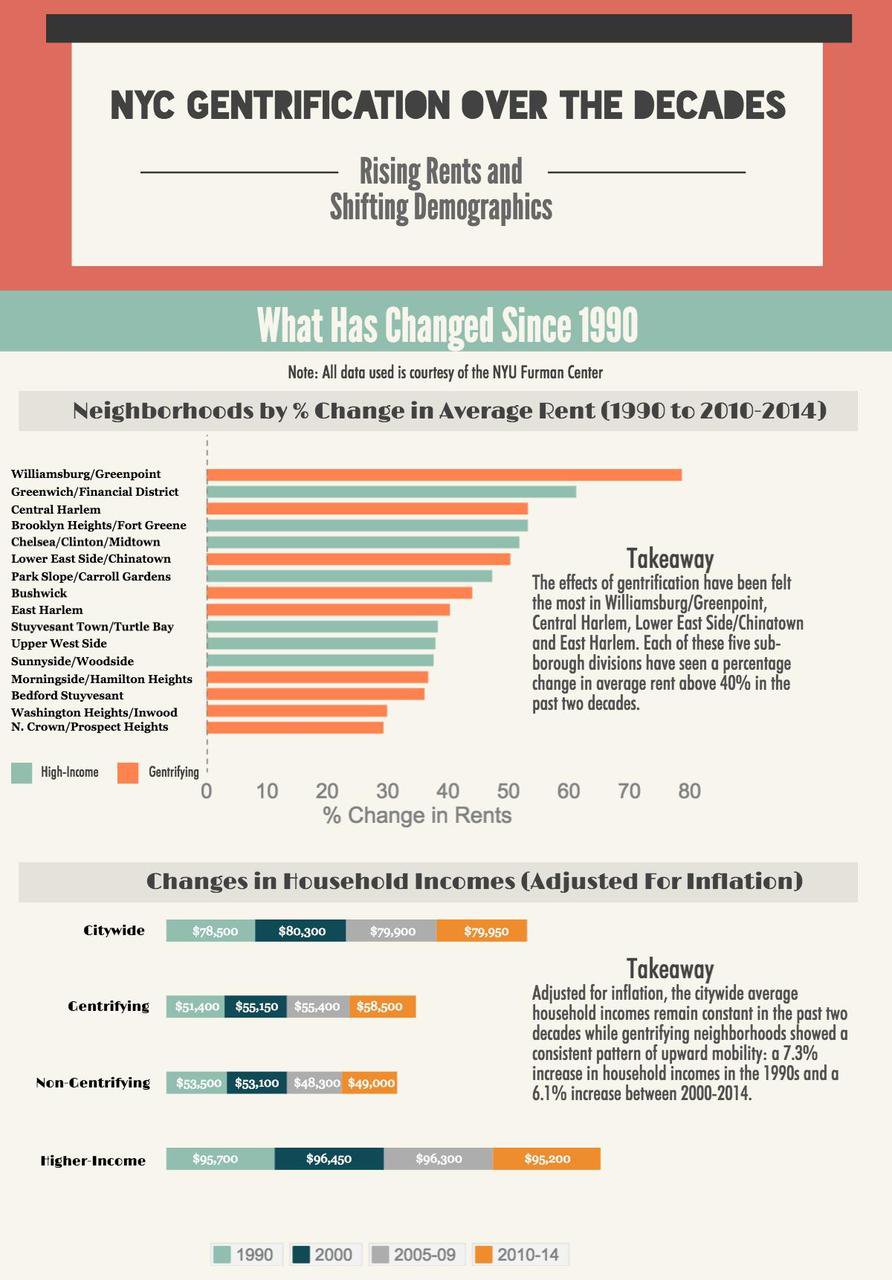 Here are the main takeaways from the report:

· The effects of gentrification have been felt the most in Williamsburg/Greenpoint, Central Harlem, Lower East Side/Chinatown and East Harlem. Each of these five sub-borough divisions have seen a percentage change in average rent above 40% in the past two decades. Often presented as the most conspicuous case of gentrification, Williamsburg/Greenpoint experienced a staggering 78.7% change in average rent during this time period, in contrast to a 22% citywide change. What is now a bohemian/hipster hotspot, teeming with nightlife, art galleries and vintage stores, the area was predominantly a working-class and immigrant neighborhood before the 1990’s when it began to attract artists and young college graduates seeking cheaper rents. Courtesy of the artists, the area garnered a “cool” and “edgy” reputation, making the neighborhood a hotbed for culture and the arts, in turn attracting media attention that has made Williamsburg into the celebrated tourist attraction that is it today. The forces of gentrification have been so remarkably strong in Williamsburg that the neighborhood is almost unrecognizable from what it used to be—still evolving with new constructions slated to launch or begin this year and chain stores seeking to move in to profit from the neighborhood’s appeal.

· During the urban decay of the 1970’s, when major structural changes were happening in post-segregation America, 822,000 people left New York. Many believe that the urban decay caused “white flight”, the migration of middle-class and upper middle-class white families to suburban America. The report finds that gentrifying low-income neighborhoods bore the brunt of this exodus from the city between 1970-1980, with populations declining by 25.9% percent in these areas compared to the 10.4% decline citywide and a negligible 2.3% in higher-income neighborhoods. Since then, New York City has seen a 15.1% increase in population, offsetting the urban exodus of 1970’s. However, despite gradual increases in population, gentrifying sub-boroughs are yet to recover, still lagging 15.8% behind the 1970 population. At the same time, according to the study, housing stock growth has been the fastest in gentrifying sub-boroughs—the amount of housing units rose by 7.2% in these neighborhoods compared to 4.5% in higher-income neighborhoods and 5.5% in neighborhoods not undergoing gentrification. This means that the rents are rising in spite of housing stock growth and the decades-long underpopulation of gentrifying neighborhoods. Moreover, the study finds that new rental units have become less affordable to low-income households throughout the city but especially in gentrifying sub-boroughs: 77.2% of newly available rental units were available to low-income households in 2000, however between 2010-2014 that percentage had halved. 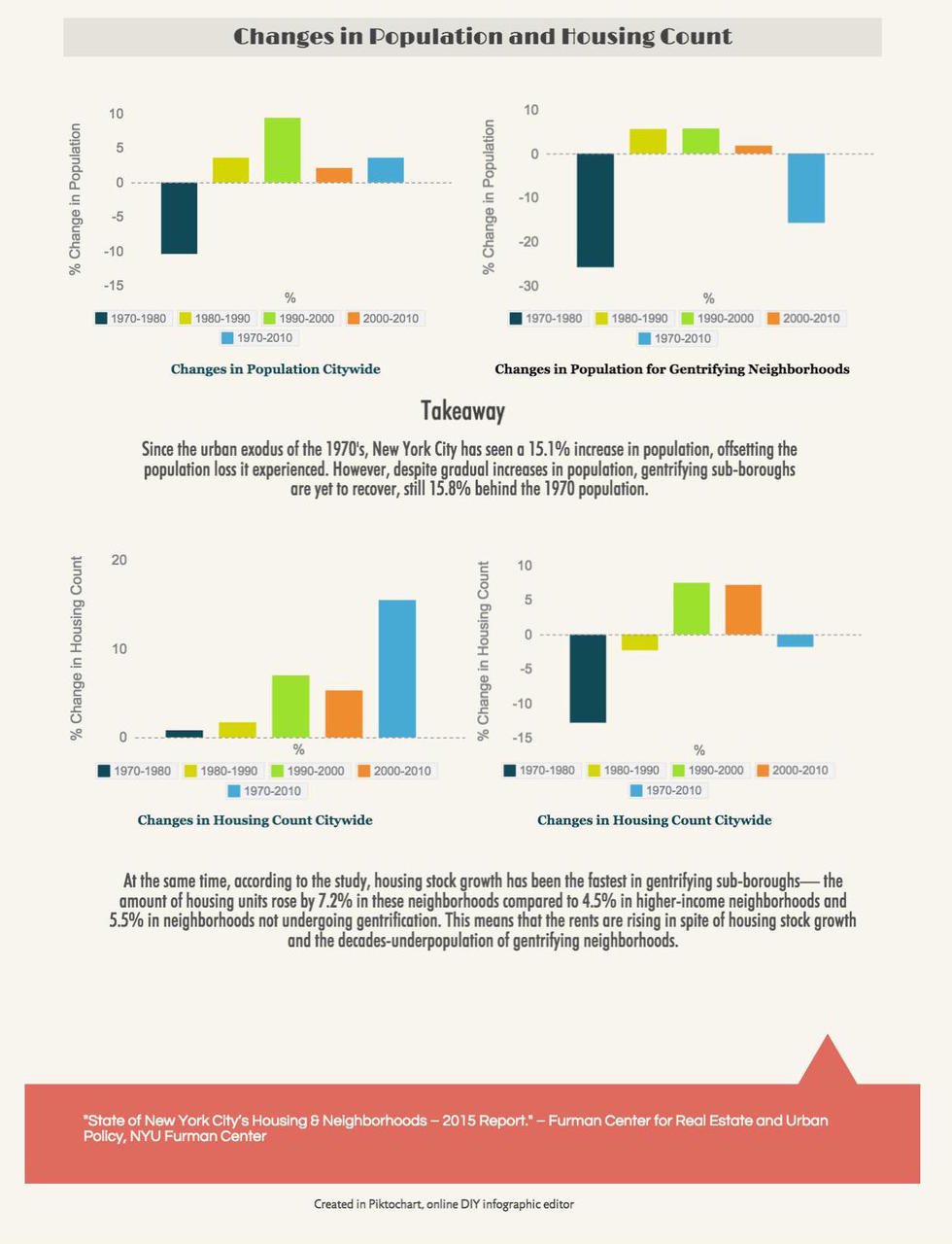 Critics and advocates of gentrification alike will interpret the data differently to tell diverging stories. However, setting the politics aside, the data does allow us to make some value-free inferences—gentrification is unfolding at a drastically fast pace, exemplified by the 78.7%—almost double—change in average rent in Williamsburg/Greenpoint in the past two decades. It is also interesting to note that these rapidly gentrifying neighborhoods still have not recovered from the population exodus of the 1970’s. So, perhaps there is potential for accommodation in these neighborhoods for all socioeconomic classes. Critics of gentrification bemoaning the displacement of poor people do seem to have cause for concern: the costs of living in gentrifying neighborhoods are rising faster than ever and many may be “priced-out” of their homes if the trend continues. Headway is being made to allay some of these concerns in the legislative arena: Bill de Blasio has made the creation of "affordable housing" units the cornerstone of his agenda as mayor. At the same time, however, the study also points out that the number of poor people based in gentrifying neighborhoods has more or less remained constant over the past two decades, so we are yet to witness a mass emigration of low-income persons.

For a closer look at the data, read the full-length study here. Also, you can find the full infographic here.