Elegran Insights: Weekly Manhattan Market Data For The Week of 03/29/21 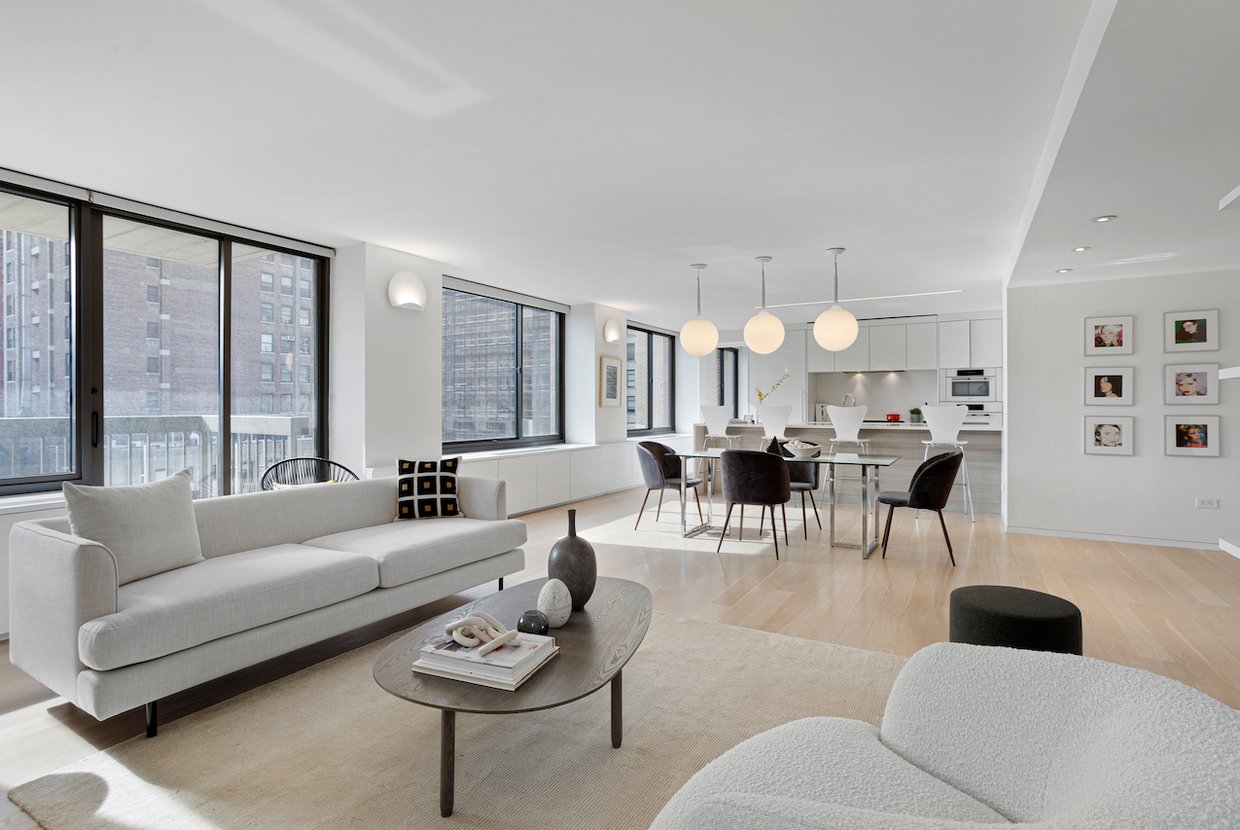 The fourth week in March saw pending sales hit the 4,000 mark, setting a new long-term record with the month on pace to set a record for contract activity. The last week of the month had more than 300 contracts signed in Manhattan, while overall supply decreased. The market pulse increased to 0.57, approaching sellers market territory.

Pending Sales increased yet again, crossing the 4K market to 4,036. Pending sales is now at a decade high and are 32% higher than at the start of the year and 12% higher than last month.

Contracts Signed - 341 contracts were signed this week, a 4% increase from last week and a 59% increase from the same week in 2019. This week’s volume of contract activity is approaching a weekly record. 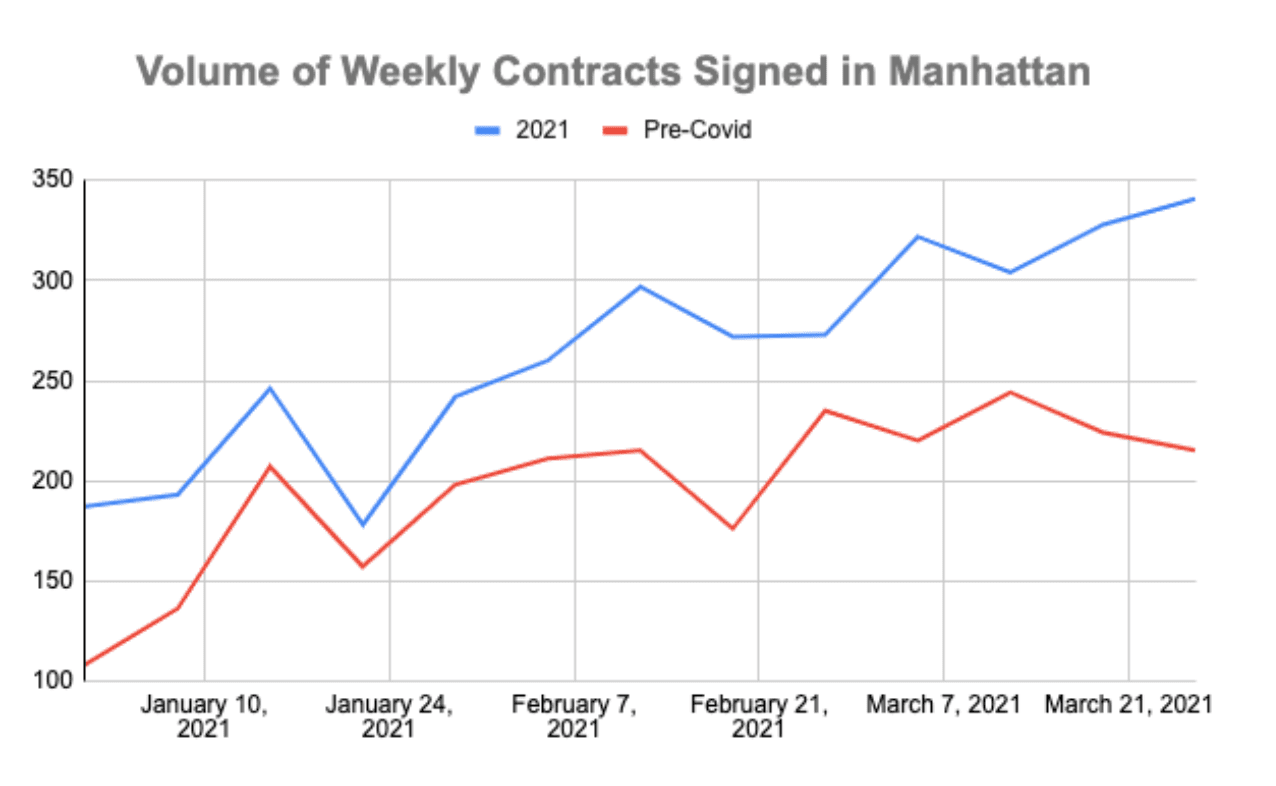 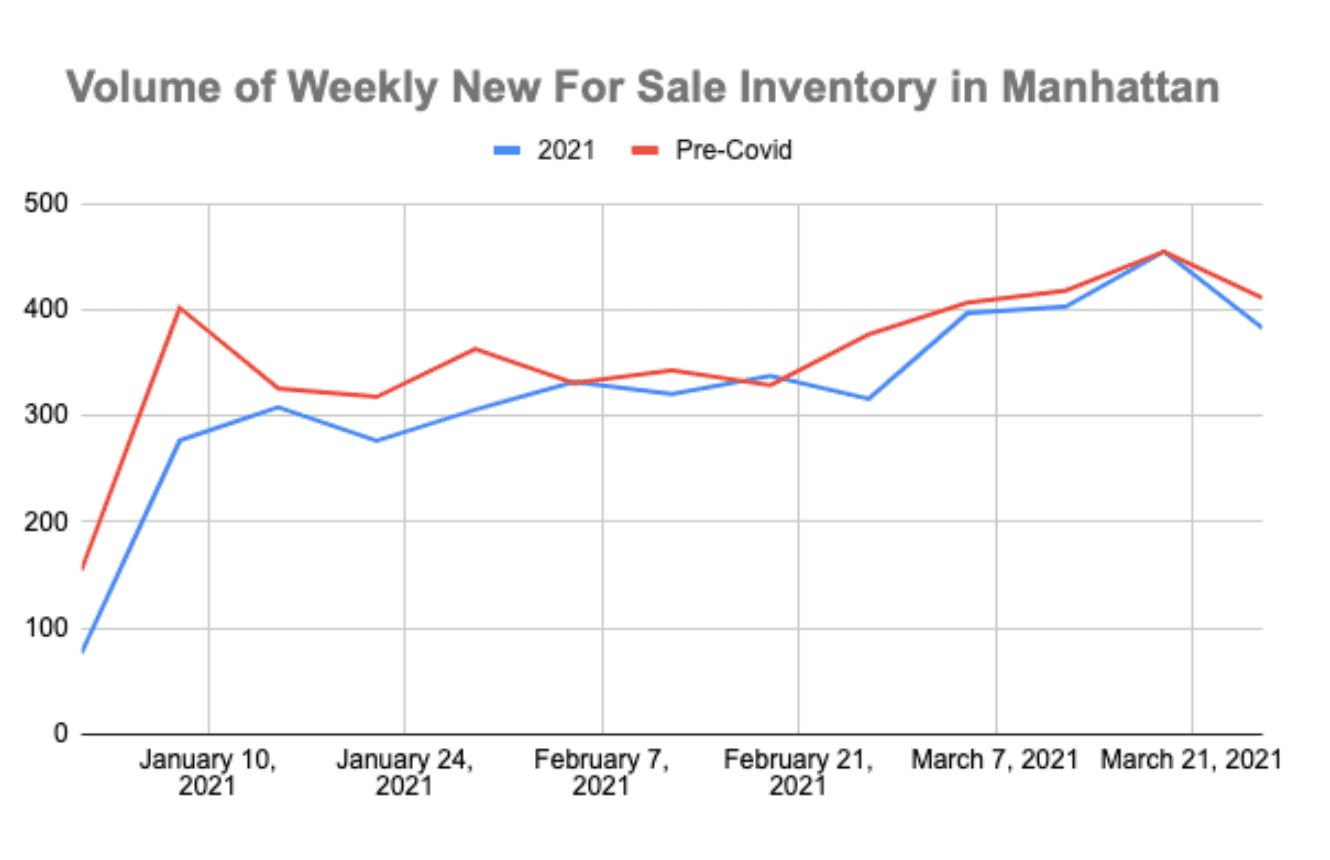 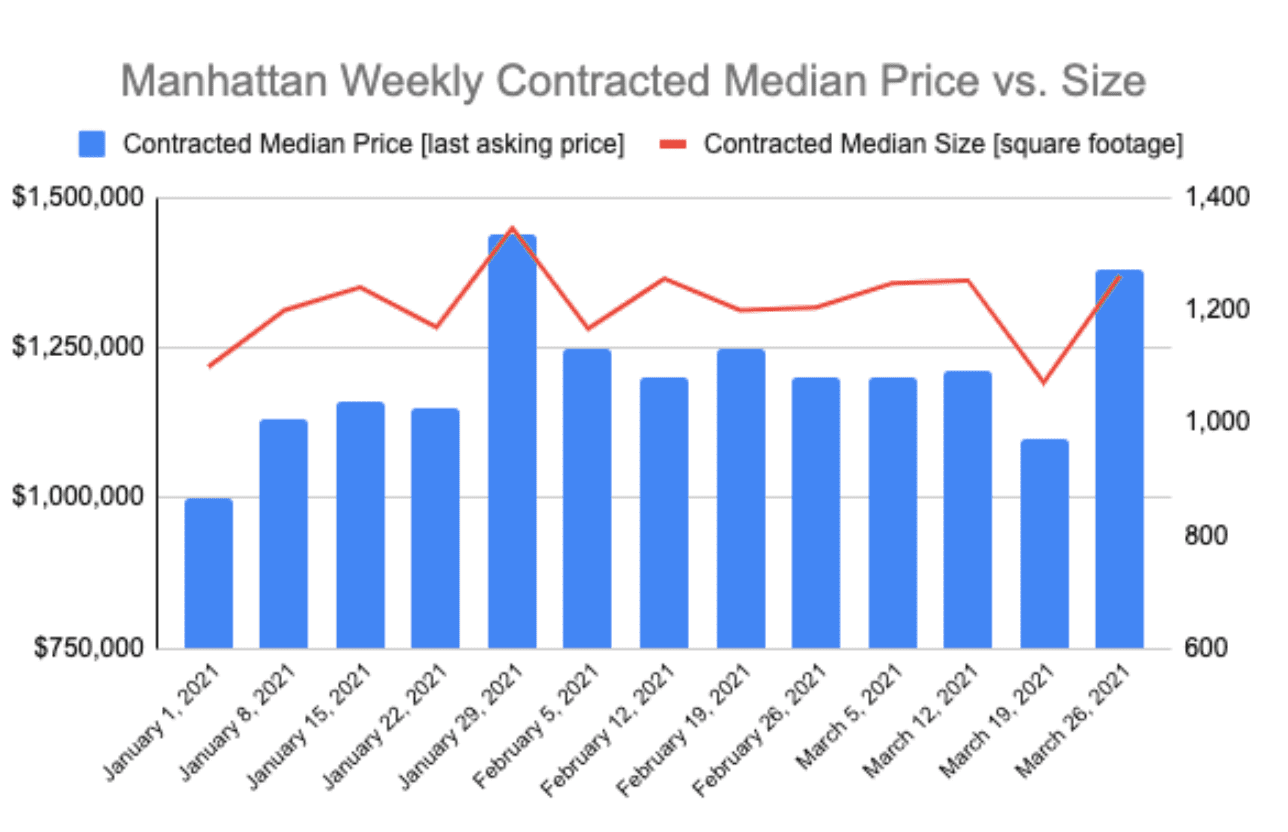 The Weekly Market Pulse, after decreasing the last few weeks, increased this week to 0.89, as strong contract activity persists. The Rental Market continues to see listed supply decrease, breaking below 9K to 8,657 units as less new inventory came to market and more leases were signed. This week, 504 units came to market, 24% less than last week and 35% less than the same week in 2019. Meanwhile, 830 new leases were signed this week, a 32% increase from last week and a 104% increase from the same week in 2019.

Some of the steepest discounts and largest concessions that landlords were offering in the winter are disappearing as the rental market rebounds. Additionally, an increasing number of landlords are less willing to offer long-term leases and reduced rents, indicating landlords expect the rental market to continue to improve over the next 6-18 months. 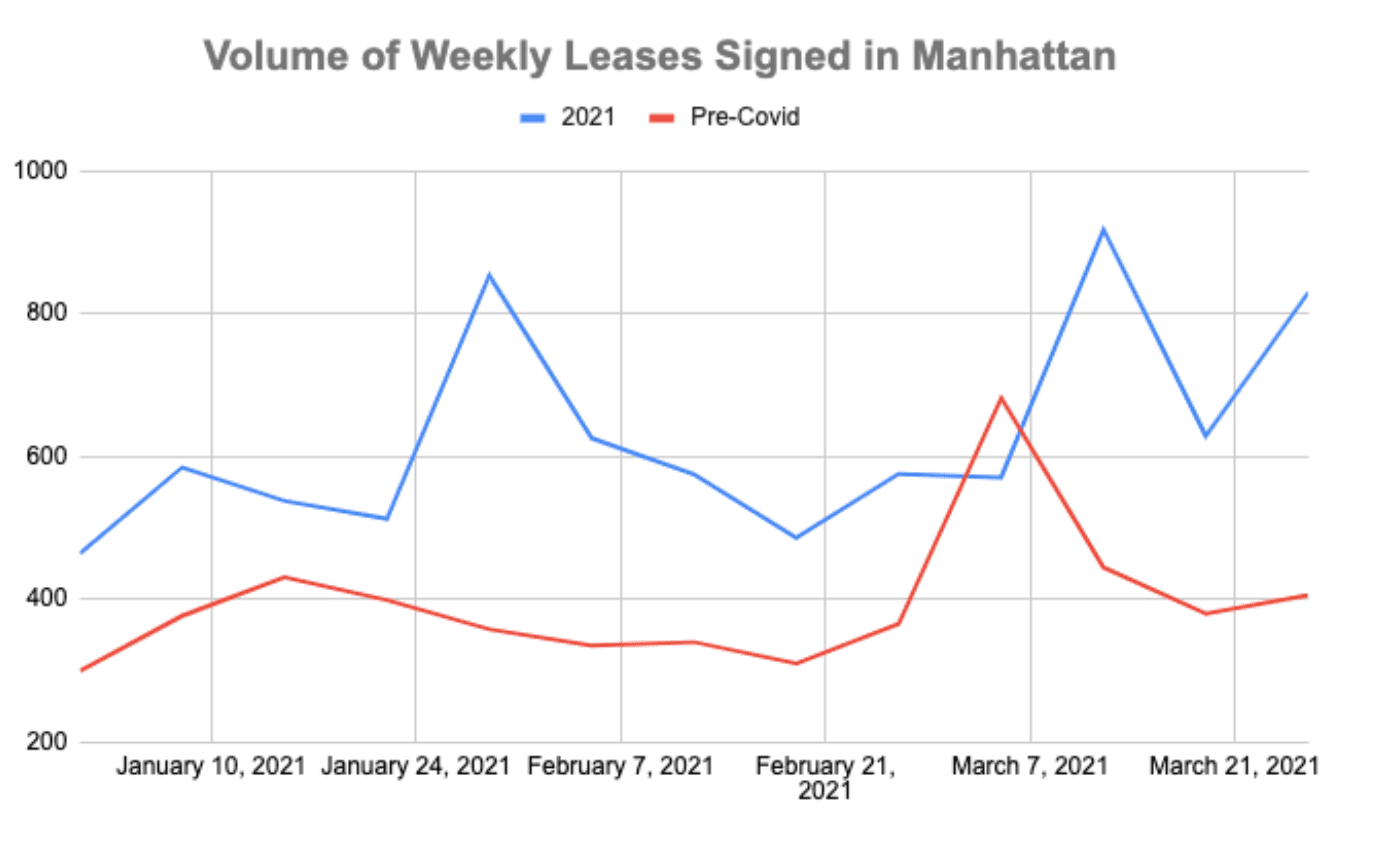 As reported by Marketproof, 86 new development contracts were signed this week, an uptick from the prior week. Brooklyn accounted for nearly half of the contract activity in Manhattan, Brooklyn and Queens, a larger share than in past weeks. Additionally, both 1-bedroom and 4-bedroom apartments saw an increase in contract activity compared to the monthly average in February. 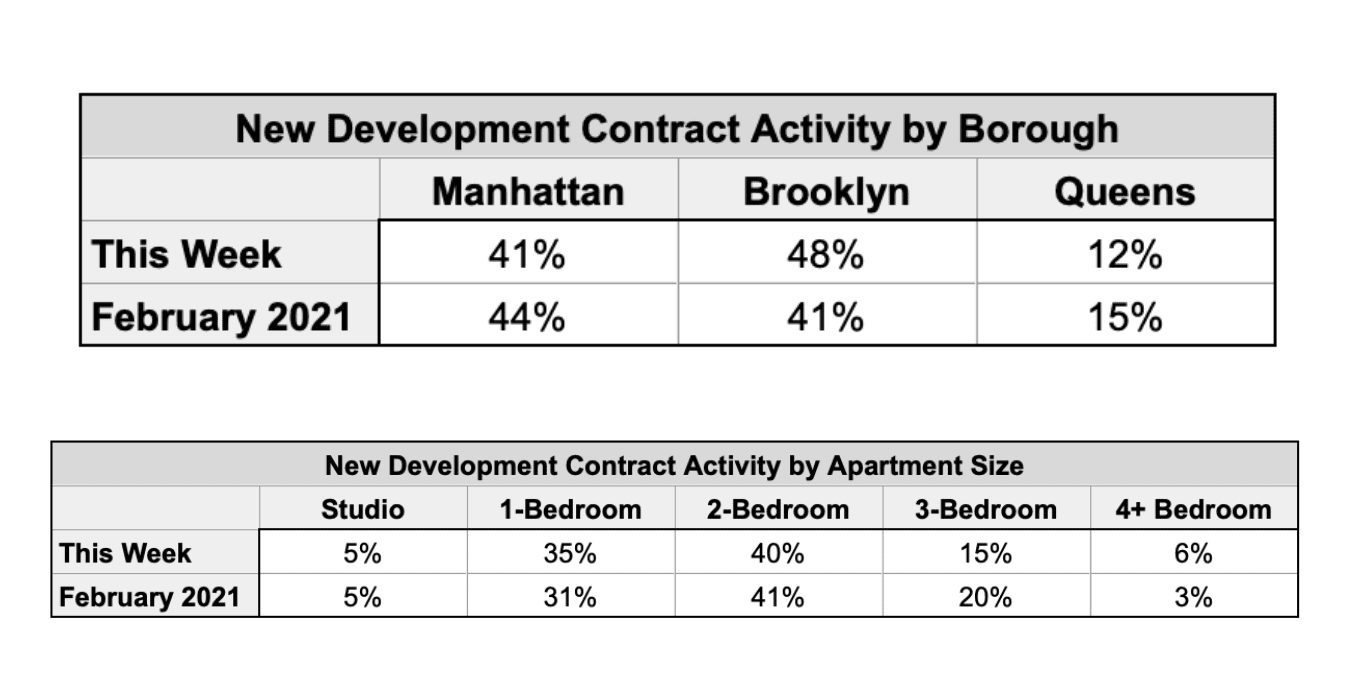 The following were the top selling new developments this week: