Alexis Carpinello grew up in Bethlehem, New York and Lake St. Catherine, Vermont - small towns with close-knit communities. It was the belief in people taking care of people and a diverse professional background that brought her to a career in real estate. After teaching performing arts, earning a BFA in Acting from Emerson College in Boston, and studying screenwriting at UCLA’s School of Theater, Film, & Television, Alexis went on to work in film, restaurants, fashion, and editorial. Most recently, she held the position of Senior Editor for a New York City lifestyle and restaurant review publisher.

Coming from a career in arts and hospitality, Alexis translates her love of people into individualized quests for homes that tell their stories. As a paralegal for Boies Schiller Flexner LLP, she learned how ethics and honesty were and should be the foundational qualities of any business relationship, and she looks forward to earning the trust of her clients. As a detail-oriented agent, she caters to peoples’ specific needs while committing herself to being both an advisor and an ally. She puts loyalty first, and is proud to have the opportunity to turn potentially stressful moments into milestones. Alexis resides in DUMBO, Brooklyn, and loves spending her spare time running through the city’s different neighborhoods, producing film, and traveling. 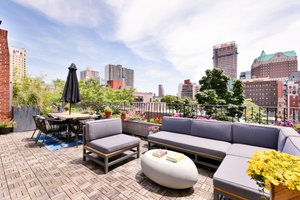 Come home to this stunning two-bedroom duplex on the top two floors of a historic Federalist-style elevator building. Located on one of the most beautiful an...